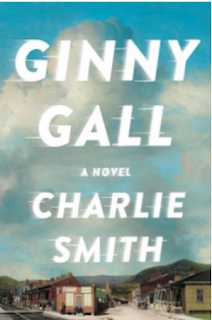 Charlie Smith is a poet and novelist who has published seven books of poetry and seven novels, including Shine Hawk and Men in Miami Hotels. His latest novel, Ginny Gall, tells the story of Delvin Walker, a tale that begins with Delvin's birth on the back porch of the house--as far as his mother got; the year is 1913, and it is a hot July day exactly fifty years after the final day of the Battle of Gettysburg.

Delvin's mother, Cappie, a prostitute, flees police before Delvin is five, and he and his siblings end up in a foundling home. But Devlin is a wise child, a precocious reader--he loves tales of French kings and the plays of William Shakespeare. Delvin is taken in by a prosperous African-American funeral director, Cornelius Oliver. For a while it seems as though Delvin is set to inherit Oliver's business, and the two live in quiet companionship, reading Shakespeare and Walter Scott.  But the terrorism of the Jim Crow South is never far in Ginny Gall, and Delvin is shaken by the death of a lynching victim, followed by a church burning, that sets an ice-cold fear in his belly. Soon he is in trouble, and on the road.

Smith's writing most closely resembles William Faulkner or Cormac McCarthy in style. His writing is lush and filled with rushing sensations--the sensory details sometimes nearly crowding out the sense. But Smith's lyricism is genuine, not forced, and there is real beauty in his prose.

In subject matter, Ginny Gall is something like Richard Wright and Ralph Ellison, but Delvin is no Bigger Thomas, and not as lost as Ellison's nameless "Invisible Man." But Delvin, with his penchant for stories and collecting experiences, can't evade the cruelties and the violence of his time. He is falsely accused of rape, along with a group of African-American men, in an episode reminiscent of the Scottsboro Boys.

Ginny Gall is an important book, one that deserves to find a wide readership. Highly recommended for the fine lyricism of the writing, and for the compelling and important tale of a past that is not entirely past.

Posted by bibliophiliac at 6:59 PM

I really want to read this one after your wonderful review. Delvin sounds like a terrific character.

This book arrived in my store yesterday to be put out on display, and I was curious about it. Thanks for the review!

I can see this being a book taught in schools at some point. It sounds very compelling. Thanks for being a part of the tour!