Sunday Salon: Books within Books and Stories Within Stories 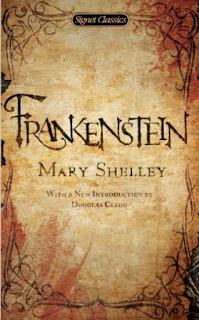 My full immersion in Frankenstein is coming to an end....sadly. Is there anything more satisfying than just losing yourself in a narrative, and then following all the connections and ideas? I guess that's why being an English teacher is working out for me!

Frankenstein is not a perfect book, and it has its moments of awkwardness and digression. But as a novel of ideas, a novel of interlocking narratives and themes, it is endlessly fascinating. Just the story of Mary Shelley herself, and then the story of the genesis of the novel, is enough to draw a reader in.

As many readers probably know, Mary Shelley was the daughter of Mary Wollstonecraft and William Godwin. Wollstonecraft died just days after Mary's birth, of complications of childbirth. As Mary grew up without a mother (her father did remarry, and the stepmother detested Mary), she communed with her mother the only way she knew how--by extensively reading and rereading her mother's books. As a teenager, she went to her mother's grave in St. Pancras' Churchyard to read and seek communion with her mother. Later her mother's grave was the spot where Mary secretly met with her lover, the married poet Percy Shelley.

At a very young age, Mary formed a connection between birth and death. After she and Percy ran away to Europe (along with her stepsister, Claire Clairmont), Mary gave birth to a daughter who died within three weeks (the child was never named). She suffered stillbirths and miscarriages; and back in England, Percy's wife Harriet committed suicide by throwing herself into the Serpentine (at the time she was pregnant with another man's child). Is it any wonder that Mary Shelley was obsessed with both birth and death?

Two things that I wanted to mention about this novel, and then I'll stop (really!). First, I love the story within a story within a story form of the narrative. And each story has an audience: Robert Walton writes letters to his sister in the frame narrative (this is the device for telling the story of Robert Walton's narrative, and the device for recording the two inner narratives). Then Victor Frankenstein tells his tale (to Robert, who writes it down in his letters), then, finally, the creature (or nameless monster) tells his story to Victor Frankenstein, who relates the tale to Walton. The other element I just want to touch on is the prevalence of books in this novel. Victor Frankenstein's fate and ambition are sealed by his choice of the wrong books, and the wrong pursuit of scientific ambition. Then the creature that Frankenstein creates educates himself by reading Paradise Lost (which he takes as a factual history), Plutarch's Lives, and Goethe's Sorrows of Young Werther.

As a book-obsessed reader, I'm always fascinated by the books mentioned within books. Eward P. Jones mentioned the short stories of Mary Lavan in one of his short stories, and I sought out and read the work of this wonderful Irish author. Richard Wright's Black Boy is a reading list in itself (he is a voracious reader, and reads everything from H.L. Mencken to Gertrude Stein in the course of his memoir). And I love John Green for always including a slyly surreptitious reading list into his novels. Books inevitably lead to more books.

After my intensive reading of Frankenstein (and lots of ancillary reading, research, etc.), I'm ready to read something purely for pleasure. Three books are on my list (of course it can't be just one).

The Bone Clocks by David Mitchell

Wool by Hugh Howey (started reading this in the bookstore....how did I not know about this one?)

What else is out there that I don't know about but is amazing, compelling, immersive?

Are you led from book to book in some unusual way?

Posted by bibliophiliac at 9:37 AM

Now you've made me want to pick up Frankenstein right away - if for no other reason than that narrative style!

I love it when there are book connections that lead you to discover other authors/worlds/etc. I've not read Frankenstein but every year I keep saying I have to finally get to it. Maybe this will be the year! :)

Let us know what new book you end up reading.

I love discovering books to read from books I'm reading! And I have read Frankenstein many moons ago and enjoyed it!