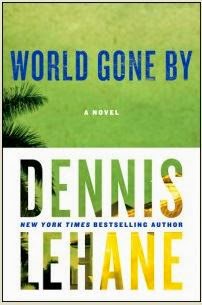 Dennis Lehane is a masterful writer who specializes in gritty crime novels that are richly textured and morally nuanced. He is a Boston native who is particularly good at capturing the underworld of what former mayor Kevin White always called "our fair city."

World Gone By follows two previous novels about Joe Coughlin, consigliere for the Bartolo crime family in Tampa, Florida. While it would have been helpful to have read the two previous novels (The Given Day and Live By Night), I don't think it is at all necessary to have read them in order to enjoy World Gone By.Reading this novel has made me want to go back and read the first two.

There is so much to love about this book, that I almost don't know where to begin. First, there is the beautifully drawn historical setting: the action of the book takes place during World War II, roughly during December 1932 to March of 1944. The mobsters in the novel have all made their fortunes, and Joe Coughlin has become a semi-respectable businessman, ostensibly retired from his gangster past. He has a young son, Tomas, who he adores and protects, attends Catholic mass on a regular basis, and hobnobs with the mayor and his wife.

As the novel unfolds, Lehane draws the reader in, building a layered world with its own (dubious) moral code. The reader becomes intimate with Coughlin, and inevitably the consigliere becomes appealing, even likable, despite the fact that he is also a mobster and a brutal killer. Lehane is particularly good at swiftly drawing out the casual and disturbing brutality of this world, while also showing the goodfellas as a bunch of church-going regular guys, with profound friendships and their own code of honor.

The plot line that pulls the narrative forward is a warning Coughlin receives early in the book: that there is a hit out on him, by an unknown person, and that there is even a specific date for the hit. As Coughlin tries to come to terms with his dark past, and determine if he has a future, he also seems to be haunted--in the most literal way. He keeps glimpsing a ghostly small boy, one who has some wordless message for him.

World Gone By is a deeply satisfying read; Lehane has amazing skills, and his ability to draw complex, morally ambiguous characters is unparalleled in crime fiction. He's almost too good; the reader finds herself hoping that a morally corrupt killer will somehow evade his fate. Reading a Lehane novel is such an immersive experience--you can just sink yourself into the story, knowing that you are in the hands of a master storyteller.

One of the things that makes World Gone By so interesting is the historical context. The book is set in Tampa, Ybor City, and Cuba. Lehane gives his novel a realistic historical feel by adding Meyer Lansky and Charlie "Lucky" Luciano as minor characters. I just have a couple of warnings for readers: first, there is brutal violence in this book. Second: Lehane's writing is absolutely addictive. You should probably line up a couple of Lehane novels to read after this one, because you won't want to stop after just one.

Posted by bibliophiliac at 3:49 PM

I think Mystic River is the only Lehane book I've read and I loved it. I can't wait to get to this one.

Thanks for being a part of the tour for this fantastic read!

I'd like to invite you to bring your love of books and join us as an author in Alexandria, either as an occasional guest author or as a fully privileged Resident Author.

Alexandria might also be the perfect place in which to write about issues and interests which may not yet be an ideal fit for your current blog.

If you think you might be interested in becoming a Resident Author, let me know and I'll forward our formal invitations for you to look over and return, if you decide to proceed.

I look forward to hearing from you.