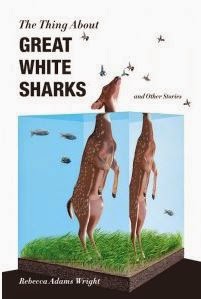 The Thing About Great White Sharks and Other Stories
Rebecca Adams Wright
Little A
paperback, 170 pages
A review copy of this book was provided through TLC Book Tours

I think we'll be hearing more from Rebecca Adams Wright, author of a debut story collection The Thing About Great White Sharks. This dazzling collection of stories received a starred review from Publishers Weekly, and I can't think of when I've encountered a collection so quirky, original, witty and unique.

Wright has a very distinctive voice, and it gives her collection a nice sense of cohesion. Other than Wright's witty, edgy voice, not much else unifies the stories in this collection, except that they are all of our world, but just slightly strange or other-wordly. The stories take place across several continents and galaxies, in our own time period or slightly in the future; and one story takes place during World War II. I've been trying to come up with writers to compare these stories to, and it isn't easy--which gives you an idea of the originality of the work. Maybe a bit of Ray Bradbury, with some Octavia Butler and a little Margaret Atwood mixed in?

The first story in the collection, "Sheila," drew me in immediately. In this story, a retired judge is very attached to his beloved Brittany Spaniel--who is twenty-five years old, and a robot. The decision he faces about Sheila's fate, and the surprising choice he makes are an interesting doorway into the world of Rebecca Adams Wright. I loved some of these stories more than others, but there wasn't a single one in the collection that didn't at least entertain me.

"Orchids" and "Tiger Bright" both feature ghosts or voices from the beyond. In "Tiger Bright," a husband muses about the full-grown Bengal tiger he and his wife have inherited from a friend, and how the tiger has helped them overcome their grief at the loss of a child. In "Orchids," a rather spunky seventy-something widow communicates with exotic plants and solves a mystery.

"Storybag" blends genres: horror, fairy tale, and adventure story. In fact, blending genres is something at which Wright excels. Most of the stories in The Thing About Great White Sharks have at least an element of science fiction, often with a fantasy aspect. The title story is probably my favorite in the collection, just for sheer audacity. Imagine a world where everything, plants, insects, animals, even blades of grass, is gripped with a fever that causes everything to attack and destroy all human life. Now imagine that a few human beings are detached enough to survive, and that they are test subjects at the "Kierkegaard Institute." Weird, yes, but somehow Wright makes it not just believable, but also funny, witty, and profound. I love the scene in the story when the main character, the blandly named Jennifer, coolly faces a hammerhead shark.

The thing is, life is strange. The stories in The Thing About Great White Sharks give the reader just the right blend of strange and recognizable. Highly recommended.

Posted by bibliophiliac at 7:20 PM

Bizarre sounds like a good word to describe some of these stories, but fascinating is a good word as well. I think I'll be picking this one up!

Yeah, I know I want to read this one.