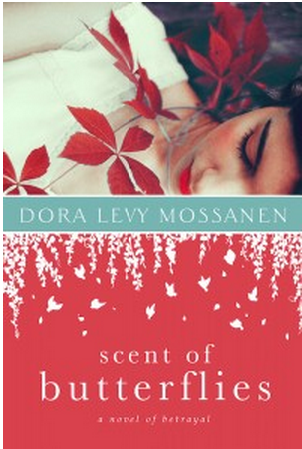 
Scent of Butterflies is an intense and dark psychological novel that drew me in almost against my will. The main strengths of this novel are the incredibly textured and intricately woven writing, and the glimpse into Iran both before and after the Islamic Revolution of 1979.

As Scent of Butterflies opens, Soraya is on an airplane headed to Los Angeles after having discovered her husband and her husband in her own bed. Her discovery, however, in unknown to her betrayers. Soraya goes to California on a pretext--she tells her husband that it is her work as a photographer that necessitates her journey. And she has to tell her husband something, because she needs his written permission to leave the country.

Soraya moves into a Bel Air mansion--she is of the entitled and wealthy elite, a fact that informs much of her decision-making. She starts to cultivate a large garden, and plants eucalyptus trees on the grounds of the estate. Meanwhile, Soraya's husband and best friend, still back in Iran, remain unaware of Soraya's activities, and of her dark plot for revenge on both of them. Parvaneh, Soraya's friend and betrayer, is revealed to be a smaller, weaker version of Soraya--a sort of doppelganger. In childhood, Soraya was Parvaneh's protector and confidante; the two women even married two men who are friends and business partners.

At times I found Parvaneh (whose name means "butterfly") almost more sympathetic than Soraya. Even when every secret is revealed, Parvaneh's behavior is somehow seen by the reader as part of a series of complicated psychological forces, not acts of malice. Soraya (who begins calling her friend "Butterfly" seems the irrational one. In California, along with her collection of plants, Soraya cultivates butterflies, which she seems to take great pleasure in killing.

The weird and unsettling patterns of Soraya's thinking actually become sort of beautiful, and this is because of the artistry of Mossanen's writing. She develops several intersecting patterns of imagery that work beautifully at drawing the reader in to Soraya's disturbed thinking. Soraya has a brilliant mind, and there is much that is appealing in her independence and her wit--even as she is on a path of destruction.

Without giving too much of the plot away, I loved the twisted, dark nature of this psychological novel. There was also so much that was fascinating in the depiction of daily life in Tehran, both before and after the Islamic revolution. The feeling of the novel is claustrophobic--I think the novel I was most reminded of was Laura Kasischke's Mind of Winter. I think this is because both novels were so dominated by one woman's disturbed mind.

Posted by bibliophiliac at 2:41 PM

"I rather admired her unhinged obsessiveness" Well THAT sounds very interesting to say the least! I'm glad you were so drawn into this story.