Review: I Regret Everything 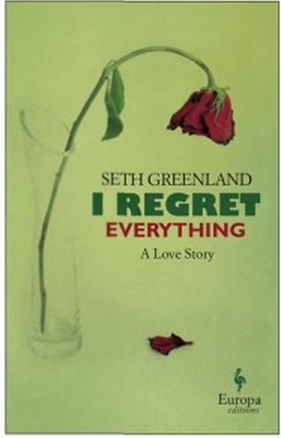 I Regret Everything: A Love Story
Seth Greenland
paperback, 256 pages
Europa Editions
A review copy of this book was provided by the publisher through TLC Book Tours

I Regret Everything is an enormously appealing story that combines some edgy topics: sex, death, money.... and poetry. Jeremy Best is a Manhattan trusts and estates lawyer on his way to making partner in the law firm of Thatcher, Sturgess, and Simonsen. Best also has a parallel career as a poet, using the pen name Jinx Bell. This gives Greenland a wonderful excuse for witty word play throughout the novel. Greenland has been a writer producer on the HBO series Big Love, and he is adept at keeping the narrative moving at a tight pace, with canny cultural references and witty dialogue. The writing in I Regret Everything is light and funny when it needs to be, which is most of the time--even when the subject is serious or dark.

The novel is told from two points of view: Jeremy's, and that of Spaulding Simonsen, his love interest--a nineteen-year-old aspiring poet, and the daughter of Jeremy's boss, the intimidating "Edward P" Simonsen. Spaulding waltzes into Jeremy's office one day and announces that she knows his secret--that he is a poet published in such impressive journals as The Paris Review. Jeremy is immediately smitten, but also cautious, knowing that an affair with the daughter of one of the firm's partner's would put his plans of making partner at risk. And Jeremy is very risk-averse.

Both Jeremy and Spaulding have troubled pasts: Spaulding has spent time in a mental institution, after a failed suicide attempt. And Jeremy once had a catastrophic love affair with his professor's wife (one reason for his use of a pseudonym).  He also grew up with a mother who was mentally ill, and a father who was cold and reserved, then left the family to pursue a love affair with another man. With such troubled pasts, and so many obstacles to their relationship, of course Jeremy and Spaulding end up getting involved--against Jeremy's better judgment and best intentions.

Much of I Regret Everything is about confronting monsters, both real and imaginary. As Jeremy knows all too well (it's his job to know) everyone dies, and no one thinks they are going to die. The lovers in this unusual romance have to face their own unhappy pasts, the ways in which they each have been afraid to grasp at happiness. There are realistic monsters too; in fact, that might be one of the more interesting insights of this novel--the way the characters figure out for themselves what and who they should fear.

Some of the complications that drive the narrative include Jeremy's discovery early in the book of a suspicious lump. The threat of cancer looms over the love affair between Jeremy and Spaulding, giving it urgency, and somewhat excusing the age difference between the two.

The novel works largely because it is remarkably vibrant and full of life, and the characters are both real and likable. I was skeptical at first about Spaulding as a love interest for Jeremy; she's only nineteen, and nineteen can be so young. But Jeremy's almost monastic life has kept him developmentally delayed romantically; it's as if he's skipped late adolescence and early middle age and gone straight to old man territory. At age thirty-three he should be too old for Spaulding, but she is like the Ariachne who leads him out of the labyrinth of his own mind into the real world.

The interest of the two main characters in words and poetry gives Greenland every opportunity to lard his novel with beautiful language. The words practically spring off the page, and the voices of the main characters are perfect. I Regret Everything is a high-energy comedic romance that is unexpectedly moving. I thoroughly enjoyed this intelligent and poignant story of love, loss, and poetry.

Posted by bibliophiliac at 4:31 PM

This story sounds so very different from anything I've read before, and it sounds amazing. I'm glad to see that you can recommend it so highly.

I have a soft spot for writers who can take serious subjects and handle them with a light touch. Makes it so much easier to think about the subjects while still making sure that readers are, in fact, thinking about the subjects. I'll have to check this one out.