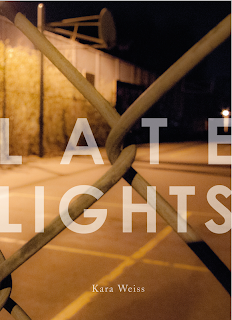 
Late Lights is the debut book for writer Kara Weiss. Published by Wisconsin-based indie publisher Colony Collapse Press, Late Lights is a novella-in-stories set in and around Boston. The interconnected stories revolve around three childhood friends who have grown up and followed very different paths....or maybe it would be more accurate to say that life and circumstances have treated each of them quite differently.

The characters are Monty, a young man who has been in and out of juvenile detention since age twelve, B.J., a girl from a fractured but not entirely broken family, and Erin, a child of privilege, whose parents are both lawyers. In the title story, the reader is brought inside a juvenile detention facility, and it is unremittingly harsh. The routine brutality of daily life for Monty is rendered in the minutest detail; Weiss doesn't spare her reader. In the other, linked stories, Monty's childhood friends B.J. and Erin enter the narrative, but by that time I was entirely attached to Monty. By the end of the book I wanted to adopt him.

The stories in Late Lights are finely crafted; Kara Weiss is a young writer to watch. There were stunning moments in each of the stories, and "Late Lights" and "Something Familiar" are superb. I loved the characters in this novella-in-stories, and admired the artistry with which Weiss created interconnecting stories that formed a loose narrative. At times I wondered how realistic it was that Erin, an upper-middle-class girl living in a nice neighborhood, would be friends with B.J. and Monty. But it is clear from the stories that this gap between privilege and poverty is one of the themes Weiss is exploring.

In "Something Familiar" Monty has been released from juvenile detention, and is attempting to find some common ground with a father who is abusive and clearly doesn't want him around. It is a heart-wrenching story, but a story that offers some hope.


Your first day home is about learning the new rules. Things change while you're gone, and the quicker you can catch up, the less destruction you're liable to cause. This was a lesson Monty had learned years ago---it was the kind of realization that snuck up on him, and he'd taken to it as a kind of faith.

"Something Familiar" is my favorite story in this collection, but the stories work together as a whole to portray not just individual characters, but the way these characters are interconnected, the way their lives intertwine. And each of the characters encounters a painful crisis in Late Lights.

For B.J. there is loss and confusion as this tomboy tries to adjust to a body that is changing in distressing and unwelcome ways. Her family structure is shaky but loving; her mother is losing the struggle to control B.J.'s delinquent brothers, and B.J.'s father is living apart from the family. But the fragile bonds are still holding in this family:


Their relationship has almost nothing to do with words. There's no translation for the contents of their shared silence: burying their old dog in the woods; washing and drying venison-bloodied dishes in the deep metal sink; the timbre of his voice when he says, "look," meaning the reds, yellows, and oranges that cover the hills for a fleeting half month in October.

And for Erin, the struggle is for autonomy and intimacy, neither of which seems easily available in her spotlessly clean home filled with an abundance of lovely things. Even Erin, who seems to have everything, suffers unexpected loss and pain in Late Lights.

I would recommend Late Lights for readers who enjoy reading linked stories, and for fans of gritty realism. I found Late Lights realistic, compassionate, and gripping. This relatively brief book is deeply moving and memorable, the characters hauntingly real.

Posted by bibliophiliac at 7:45 PM

I love linked stories like that! This sounds good to me!

@bermudaonion-I really like linked stories too...the character of Monty reminded me so much of one of my former students, this book really touched me.

Sounds like this is a book that will stick with you for a long time. I'm looking forward to reading it - I'm a huge fan of linked stories, and these sound great!