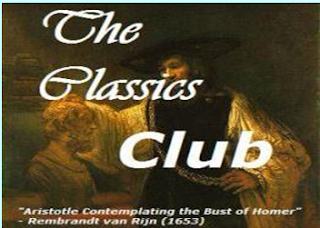 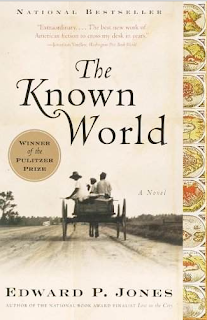 The Known World has been on my list for a long time now. It is one of the books on my list for The Classics Club, and it has been on my TBR list forever. Which is all very puzzling---I should have read this book long ago, considering how much and how long I have admired Jones's stories. He has published just two short story collections, Lost in the City and All Aunt Hagar's Children; if Jones had not published anything else, I would still consider him one of the best writers living today. Now, having read The Known World, I am even more in awe of Jones's talent.

Jones won the Pulitzer Prize for The Known World, and it is impossible to overstate the immensity of his achievement with this novel. He creates an entire world, so fully imagined, that when I finished the book I felt I was rudely awakened from a continuous dream.

The seed for The Known World began with a historical fact that Jones picked up in college: he was surprised to learn that there had been black slave owners. This single fact evolved into a story that Jones worked on for over a decade....entirely in his head. For ten years, Jones did not write down a single sentence of his novel. Instead, he dictated sentences and passages to himself, repeating them over and over, committing them to memory. He imagined scenes over and over until they were seared into his memory.

Another surprising fact about the composition of The Known World is that Jones did no research for his novel. It is a fully imagined world that is so convincingly rendered the reader may be tempted to check facts, names, and maps. But the county in Virginia that Jones writes about, Manchester County, is entirely invented.

The novel begins with black slave owner Henry Townsend on his deathbed, and Townsend's slave, Moses, tasting a pinch of soil. Henry is the son of freed slaves Augustus and Mildred Townsend. Augustus buys his own freedom, then earns the money to free his wife, then finally his son. But by the time Augustus earns the money to buy Henry's freedom, Henry has been deeply influenced by his owner William Robbins. This is a crucial influence, and Robbins becomes a perverse sort of mentor to the adult Henry, purchasing slaves for him, and guiding him in the corrupt art of owning and managing human beings.

Jones explores every permutation of the evils of a slave-holding society, and there is no one who is untouched by this corruption. Robbins has a white wife and daughter, and in a house a day's ride away, a slave woman who bears him two children, children he loves and protects. The Known World is like a tapestry, with characters from every strata of life: there are Henry Townsend's slaves, including Elias, Celeste, Delphie, Moses, Stamford, and numerous children. There are the educated blacks, who consider themselves above the slaves: this includes Townsend's wife Caldonia, her friend and teacher, Fern Elston (who could pass for white, but chooses not to). There are white characters too: Robbins, another plantation owner, Colfax, Sheriff Skiffington and his wife Winifred, and several white "patrollers" (the precursors of the Ku Klux Klan). Jones includes every possible variety of human life, and every single character is somehow poisoned by the corruption and evil of slavery, whether they know it or not.

If this makes The Known World sound ceaselessly depressing, it's really not. Beautifully written and imagined, this novel is filled with sharply imagined characters, and it is not without hope, love, and compassion. And Jones has a gift for suddenly revealing events far into the future, as if whole lifetimes and more could be telescoped into a sentence or a paragraph.

Jones's novel is brimming with story....the omniscient narrator slips story upon story into the larger narrative. This never feels like an interruption, but more like a glimpse of the multiplicity of stories hidden inside every life. After Henry Townsend's death, Moses begins to come to see Henry's widow, Caldonia, each evening; he tells her stories, like a masculine Scheherezhade:


Caldonia and Moses had developed a routine with his coming to the house most of the working days and telling her what had gone on. There was rarely any real news but he related what he did say in some detail---how many shingles to repair the barn, the yields Caldonia might expect for each crop, what was fed to the slaves for dinner and supper, the number of pails of milk for each cow, how long it took to put up a new corncrib to replace the one a sleepwalking mule destroyed. Ultimately, the important thing was that the crops were rising well and that could have taken less than five minutes, but near the end of the recitation he added small bits about the lives of the slaves.

Moses draws closer and closer to Caldonia, seducing her with his simple stories of the soil and the lives of her slaves. This seduction, however, does not have quite the result that Moses expects, and again the strange relation between a black slave and his black owner is delineated in all its chilling nuances.

For much of The Known World Jones lulls the reader into a sort of uncomfortable comfort with this world of humans owning humans; the world doesn't seem so bad or so unbearable until the terrible results of the power of skin color and the corruption of ownership reach their inevitable crisis. Few characters in The Known World escape guilt or culpability or pain. But Jones gives the reader a glimpse into a happier future for some of his characters. The Known World contains grief, passion, violence, love, and even redemption; it is an immense achievement and a stunningly powerful book.

Awesome review! I keep seeing this book and have wondered about it. I might have to snag it up some day.

@Amanda-I don't know why I waited so long to read it....one of the best books I have ever read.