Review: This is Paradise 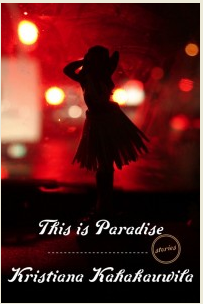 This is Paradise: Stories
Kristiana Kahakauwila
paperback, 240 pages
Hogarth
a review copy of this book was provided by the publisher through TLC Book Tours

This Is Paradise is the ironically titled debut story collection by Kristiana Kahakauwila, a native Hawaiian raised in California. Kahakauwila explores the tensions inherent in racial divisions, class divisions, and the wide gap in perception between native Hawaiians and oblivious and naive tourists.

The collection opens with a story, "This Is Paradise," which is told by a whole chorus of voices: the women of Waikiki. In this title story, a careless young tourist is lulled into naive choices by her paradisiacal surroundings. The chorus includes career women, hotel chambermaids, and a blend of knowing local voices. The blonde bikini-clad tourist is by turns sympathetic and annoying, but Kahakauwila ends her story on a somber note.

"Wanle," one of my favorite stories in the collection, is narrated by a young woman who has followed in her father's footsteps:


My dad used to say cockfighting was in his blood:  the Chinese in him liked betting, the Hawaiian liked fighting, and the Filipino liked birds. Before he died, my dad raised some of the most aggressive, well-trained battlecocks on the islands. His birds never lost a fight, so he made plenty of money off his roosters.

Wanle trains her birds lovingly; her goal is to avenge her father by beating his nemesis, a man Wanle holds responsible for her father's death. This bloody vocation disturbs Wanle's lover and threatens to come between them. The narrator recalls her father's ominous warning: "He told me that between his birds and my mom, he had chosen the birds. He said one day I'd have to make the same choice, and I'd do as he had, with the same result." Kahakauwila expertly builds tension in "Wanle"--the tension between the two lovers, and the tension between Wanle's hero-worship of her father and her growing understanding of the man she only partly knew. Finally, there is the darkly violent world of cockfighting, which the narrator describes in the most matter-of-fact terms. I liked this story for the utterly authentic voice of the narrator, and for the surprising insights mingled with loss.

Kahakauwila reveals a side of Hawaii not shown in the travel brochures and never glimpsed from the luxury hotels. She often explores the gaps in understanding between native and non-native Hawaiians, between men and women, and precolonial- and post-colonial history. In "The Road to Hana" a young couple who are both technically "Hawaiian" take a vacation together on Maui. Cameron is a "local" who grew up on Hawaii but is white; his girlfriend Becky is a native Hawaiian who grew up in Las Vegas---which one is the "real" Hawaiian? This story, although very simple, built to an almost unbearable level of tension. At one point during a mountainous car drive, Becky rescues a mongrel dog, a dog who causes a visceral revulsion in Cameron:


The dog's chest hair was delicate, white giving way to a pale tawny color. Beneath these fine tendrils, next to its pinkish skin, three thick, black lines of fleas were snaking through the fur. The fleas streamed beneath the stray's armpits and up into the dark scruff of its neck. They disappeared over the dog's sides, finding their way onto its back, and he pictured them hopping on to the upholstery in great parabolic leaps.

He hit the brakes in the middle of a hill. "Get it out of the car!"

As the story develops, Cameron's revulsion toward the dog seems to stand for some deep and unacknowledged discomfort with Hawaii and its history, and with his own girlfriend's ethnicity. None of this is ever directly stated, but the story builds a sense of deep dis-ease and tension in spite of a surface politeness.

"The Old Paniolo Way," another of my favorites in this collection, is a sweet and elegiac tale of a gay son who is tempted to finally come out to his dying father. Pilipo returns to his father's horse farm and is confronted with his own lack of honesty; he wants to come out to his father and his sister, and doesn't know if he wants to do it for others or for himself. Kahakauwila allows this story to unfold slowly, avoiding facile answers for her characters. As with her other stories, the writer blends harsh truths with unexpected tenderness.

The stories in "This is Paradise" are gritty and inventive. The writing is impeccable and honest; I found some of the stories almost unbearably tense and painfully suspenseful. I also felt I was getting a real education about Hawaii---especially as life is experienced by native Hawaiians. These finely honed stories are deeply satisfying and herald a strong career for writer Kristiana Kahakauwila; I will look forward to more from this talented voice.

Posted by bibliophiliac at 8:17 PM

This collection sounds outstanding! Thanks for a terrific review.

I think I would really like this :) Thanks for reviewing it!

Editing: I'm on a mission to inform bloggers when they are using Captcha. Perhaps you don't even KNOW that you have it turned on. Don't be offended. My new goal in life is to wipe Captcha off the face of the earth. Thank you for your attention. ;)

I'm really excited to read this because all I've been hearing is good things. Glad you liked it so much!

@Jennifer Hartling-Dang! I HATE Captcha! Thanks for letting me know.

@Jennifer-I think you will like This is Paradise very much!

You're welcome! I have a feeling that most people who have Captcha activated don't know that they do :)

The more I read short stories the more I love them, and this one sounds like a collection I could really appreciate!