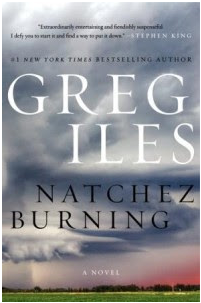 Natchez Burning brings together several of my obsessions. I grew up with an awareness of the Civil Rights movement, although I was very young at the height of the movement. Still, Martin Luther King, Jr. and his movement made an indelible mark on my childhood, and his assassination, along the the assassinations of John F. Kennedy and Robert F. Kennedy colored my memories of that time. And today, I spend time reading about (and teaching) the literature and history of the Civil Rights movement. So a contemporary thriller that reaches back into that past has an immediate appeal for me--and many of the crimes of that era, especially crimes committed in the deep South, are unsolved and buried in the shallow grave of the not-so distant past. Add to this the obvious spiritual debt Iles owes to one of my favorite authors, William Faulkner, and I am, to say the least, receptive.

Greg Iles has found a rich thematic ground to mine in this trilogy, of which Natchez Burning is the first book (The Bone Tree is just being released, and the third book in the trilogy, Mississippi Blood, is coming soon). The trilogy features Penn Cage, a character Iles first introduced in The Quiet Game. Cage is a lawyer, a widower, and a father. The death of his wife Sarah from breast cancer is important to character development in The Quiet Game, which also involves an unsolved mystery from the past. The Quiet Game also introduced Caitlin Masters, a newspaper publisher, editor, and reporter; by the time Natchez Burning rolls around (the fourth Penn Cage novel), Caitlin Masters and Penn Cage are engaged and on the cusp of marriage. Cage also has a young daughter, Annie.

In Natchez Burning, Penn Cage's father, a well-respected physician who is practically a saint in his community, is accused of a crime involving the death of a patient who has been suffering from terminal cancer. The accusation, and the connection between Dr. Tom Cage and the patient (his former nurse, Viola Turner), unexpectedly opens up a whole dark history of crime, sexual secrets, and the Ku Klux Klan. As Cage begins to investigate the past, while his father maintains a frustrating silence, he uncovers a connection to a group, called the Double Eagles, that is even more evil and sinister than the Klan. Cage's path, and his investigation, intersects with that of Henry Sexton, a local journalist who has toiled in semi-obscurity at a weekly newspaper, doggedly pursuing the story of the deaths of two Civil Rights workers, as well as the deaths of Albert Norris, owner of a local music shop, and a young musician who made the deadly mistake of becoming sexually involved with a young white woman, who happens to be the daughter of a powerful businessman.

Iles ratchets up the tension as each of the stories evolves and the past and the present come hurtling together. Even though this book is over 800 pages, I finished it in five days, mostly because I was unwilling to put it down for any length of time. And there is nothing more pleasurable than a long immersive book that is deftly plotted and beautifully written. And the best thing of all is when you have the next book in the series right on hand, so you don't have to leave the world of the novel.

Because Natchez Burning is part of a trilogy, much of the mystery at the heart of the book remains unsolved at the close of the novel. What is revealed is the large cast of corrupt and dangerous characters at the heart of the world of the novel; the novel ends with some questions answered and resolved, but with many others unanswered. And most readers wouldn't have it any other way.

I'm one of those readers who usually likes to read series books in order, but in this case, I don't think the reader needs to have read the previous Penn Cage novels. Iles is adept at plot summary (he's much better at it than I am) and with filling in gaps in the reader's knowledge of his characters and their histories. In this novel, I loved the way Iles created both minor and major characters who were vibrant and compelling; I particularly liked Henry Sexton, an old-school journalist with a collection of Moleskine notebooks and an allegiance to uncovering the truth.

Iles knows the world of his characters very well, having spent most of his youth in Natchez, Mississippi. Anyone who has done even a little bit of reading about the Civil rights era knows that the Klan and the police were often one and the same, and that there was very little justice for people of color in the South. It is all too credible that disappearances, deaths, and brutal crimes remain unsolved but not unsolvable, and Natchez Burning gives the past an immediacy and intensity that make for compelling reading. I can't wait to go on to the next book in the series, The Bone Tree (and to be honest, I've already started it). Natchez Burning marries the literary novel and the thriller in a profound meditation on some of the darkest days of our past.

For more information on Greg Iles and his books, go to www.gregiles.com

Posted by bibliophiliac at 6:32 PM

This series sounds so fantastic - thanks for the great review. Question, though: I've been hesitant to start it thinking I'll need to read the first three Penn Cage novels before starting this trilogy. Do I need to, or I can just start here?

@bermudaonion-Iles hasn't failed me yet...

@gregzimmerman-I would just go ahead and start with Natchez Burning. If you like the trilogy you can always go back.

I did, once in a while, feel like I was missing out on some things from the previous Penn Cage books and wondered if they could just as well have been left out. But this is a remarkably quick read for 800 pages!

@Lisa-I had read The Quiet Game, which was probably helpful, but I think you could easily start with Natchez Burning and catch up on the other books later on. I agree that the book is really fast-paced....

I've got this book queued up on my audio book account - I can't wait to start listening to it!