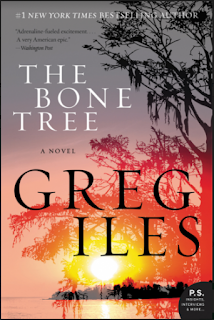 I'm still thinking about The Bone Tree, and I suspect I will be for a while. Sometimes the worst thing about finishing a book is letting go of the characters, and right now I have a huge book hangover--and I have quite some time to wait for the third book in the Natchez Burning trilogy. The publication date for Mississippi Blood is March 28, 2017. Thank goodness for backlist.

If you were to take a Greek Tragedy, dress it up in modern clothes, and give it a Southern drawl, then you might come up with the trilogy Greg Iles decided to write about history, race, blood, and the South.

In a case of synchronicity, my AP students and I have been reading and discussing Oedipus Rex for the past couple of weeks, and we've been asking lots of questions about fate.One question that comes up repeatedly is whether Oedipus would have been better off if he hadn't gone looking for so many answers. Asking questions may end in wisdom, but first comes pain.

The Bone Tree picks up right where Natchez Burning left off, with Penn Cage and Caitlin Masters having just survived a brutal abduction and near death reckoning with the wealthy and corrupt Brody Royal. Cage and Masters, with the help of heroic journalist Henry Sexton, have uncovered some of the truth about the race crimes that took place during the sixties, but they've also apparently stumbled onto something even bigger than that: they seem to have uncovered a connection to the assassinations of John F. Kennedy and Martin Luther King, Jr. And Penn Cage is still trying to find his father, Dr. Tom Cage, who has jumped bail after having been accused of a mercy killing--he's implicated in the death of his former nurse, Viola Turner.

The Bone Tree brings together one of the darkest periods of history in the United States, and explores a possible conspiracy involving the Mafia, the Double Eagles (an offshoot of the KKK), and the assassination of John F. Kennedy. If at times the historical exposition and explanation of the conspiracy cause the action to flag a bit, Iles more than makes up for it by keeping the reader riveted during tense, heart-stopping scenes involving characters the reader cares about. Iles doesn't hesitate to bring his characters to the highest pitch of danger, and life stops for the reader in the last third of the book. Iles is a genius at pacing and narrative tension. The stakes are high in The Bone Tree, and there isn't a single character or a single relationship that isn't taken to the brink and beyond in this splendid novel. Iles never lets his reader down, which is why I will fill the waiting time until Mississippi Blood with other Iles books, like Turning Angel and The Devil's Punchbowl. Highly recommended for fans of Ken Follett, Alan Furst, and even William Faulkner. Iles combines the suspense and tension of a thriller with the depth of literary fiction. The Natchez Burning trilogy is intelligent, gripping, and memorable.

For more about the Natchez Burning trilogy and other books by Greg Iles:
http://www.gregiles.com

Posted by bibliophiliac at 3:29 PM

The first book caught my attention when it came out yet somehow I never got around to reading it. I need to remedy that asap so I can follow the story into book 2.

@Heather-Thanks! I love this series....