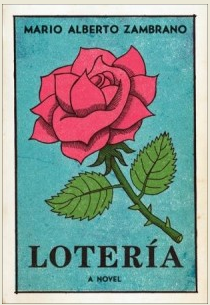 I have not been able to stop thinking about Loteria. In fact, I actually did something I'm often tempted to do with a really powerful book: I immediately began to reread Loteria upon finishing the book.

Loteria is powerful, lyrical, and raw. The novel is told from the point-of-view of an eleven year old girl, Luz Castillo, who has been taken into the custody of the state. Luz's mother is missing, her sister is in the ICU, and her father is in jail. Luz tells her own story, and the story of her family, in vignettes inspired by cards from a Loteria deck (Loteria is a Mexican game, similar to bingo). Each card has an image, and each chapter in the novel opens with a full-color illustration of a Loteria card.

The novel opens with a chapter outlining the rules of the game for Loteria, and those rules are actually quite important to the narrative. In the Mexican game, a dealer doesn't call out the name of the cards for players, but rather sings out riddles (players must be quick to keep up with the riddles). This is more than just a clever device in the novel; author Mario Alberto Zambrano has made the images, and the riddles, central to his narrative.

Loteria works so beautifully because Zambrano has created a compelling narrator in the character of Luz. She is by turns childish, frighteningly mature, profane, and funny. She is a child of violence, and her perspective as both a victim and a sympathizer is jolting. Luz witnesses violence that is casually embedded in the day to day life of her family, and violence is presented alongside beauty and love and joy. Luz sympathizes with and identifies with her violent father. The matter-of-fact voice of Loteria's child narrator makes the violence in the novel chilling and disturbing. "We all fought. We all hit each other," Luz tells us.

As the novel progresses, the narrative tension increases, and the reader begins to have the uneasy sense that Luz is building toward tragedy. There is mystery in this narrative too, and the novel ends without definitively answering all of the riddles of the story. The sense of mystery, of inconclusiveness is part of the beauty of Loteria. It is the kind of mystery that is at the heart of families, of love, of religion. I could read this book over and over again, and probably will.

For more about Loteria and Mario Alberto Zambrano, and for a peek at some of the beautiful illustrations, the author has a website here: http://www.marioalbertozambrano.com


Posted by bibliophiliac at 5:56 PM

Wow, the fact that you want to read this book again and again says a lot to me.

Wonderful review. I felt quite strongly about this book too. It really takes a grip on you, doesn't it?

@bermudaonion-I got totally got up in this one! And the chapters are very short, so I keep going back in and rereading chapters...

@guiltless reader-thanks, I loved your review too! This book is small but powerful....

@guiltless reader--I loved your review, too. This was a powerful book.

Fascinating review and website link. I hope this author does well! Thanks for posting

There have been a very few books that I have wanted to reread as soon as I finished them for the first time ... it is a rare and wonderful thing to be sure!

Thanks for posting this. I hadn't heard of it, but got it from the library. Wow. I too want to read it again, but I need some distance first. Excellent book.

@Amy-thanks for letting me know! I am so glad that you read Loteria...such a beautiful and powerful book.

I have never heard of this book until today. The review that you provided makes this seem like a very compelling book. It probably is worth the read. Thank you for sharing this with us.