Review: The Illusion of Separateness 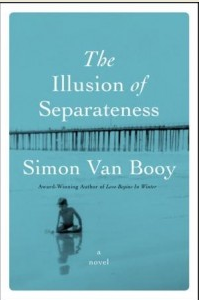 The Illusion of Separateness
Simon Van Booy
hardcover, 224 pages
Harper
a review copy of this book was provided by the publisher through TLC Book Tours

If this book were music, it would be composed of the clear tones of silver bells, or the ringing sound of a singing prayer bowl. Simon Van Booy drops his sentences down one by one, and they are lucid and clear as water. The Illusion of Separateness is a beautiful book, wise in its simplicity, and beautifully composed.

The story involves intertwining narratives that combine in a surprising way. The novel goes back and forth between narrators, settings, and time periods, beginning in a retirement home in Los Angeles in 2010. Martin, the first character introduced, is living a quiet and introspective life, working in the Starlight Retirement home. He is originally from Paris, and his parentage is a mystery, even to the family that adopted him. But Martin is connected to all the other characters in the book, and the purpose of the book is to unveil the "illusion of separateness" by revealing how the characters are connected.

The Illusion of Separateness takes the reader to France in 1944, Long Island in 1939, Manchester, England in 1981, and Amagansett, New York in 2005, making connections that are invisible to the reader, at first. How are a blind girl in her twenties, a disfigured World War II veteran, a family of bakers, and a dyslexic little boy connected? By acts of kindness and courage, both large and small.

Although The Illusion of Separateness is a fairly slender volume, it is packed with history, and probably required a substantial amount of research. It is a measure of Van Booy's craft that the reader really doesn't feel the weight of this research, mostly because the characters and the beauty of Van Booy's prose are so entrancing.

The Illusion of Separateness can easily be read in one sitting, but readers may want to read slowly and savor this gem of a book.

Simon Van Booy is the author of several books, including one previous novel, Everything Beautiful Began After, and several short story collections. The Secret Lives of People in Love was reviewed here at Bibliopihliac in 2011.

As an aside, Van Booy is probably the most effortlessly charming and endearing writer you will find on this plant. As evidence, see this:

Posted by bibliophiliac at 8:03 PM

I am so looking forward to this book!

@bermudaonion-I hope you get to read it soon!

I seriously cannot WAIT to read this! A copy is on the way right now :)

@Jennifer-Van Booy's books are so beautiful! I hope you enjoy this one....

I can't remember the last time I read a book in one sitting, but maybe that's good when it comes to this book - it would force me to take it slowly and really enjoy it!