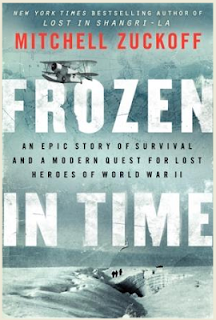 Frozen in Time: An Epic Story of Survival and a Modern Quest for Lost Heroes of World War II
Mitchell Zuckoff
Harper
hardcover, 416 pages
a copy of this book was provided by the publisher through TLC Book Tours

What I look for in a non-fiction book is a strong narrative, an almost fictional storytelling style, and a narrator who puts it all together for me. I often enjoying getting some facts with my fiction, and I like to get some fiction techniques with my facts. So Frozen in Time: An Epic Story of Survival and a Modern Quest for Lost Heroes of World War II really worked for me. Mitchell Zuckoff takes a compelling story about a historical event that is filled with natural drama and interest, and brings it all to a whole new level by interweaving the narrative with a contemporary story in which he is a participant.

Zuckoff, who is the author of another highly successful non-fiction book, Lost in Shangri-La, tells the story of  a harrowing arctic adventure. The historic narrative concerns a series of plane crashes in Greenland during World War II. It's a story of immense bad luck, difficult circumstances, and almost overwhelming odds. First, in November 1942, a U.S. cargo plane crashes into a Greenland ice cap. Then, four days later, a B-17 assigned to the search-and-rescue mission becomes lost in a storm and also crashes. Finally, in a dramatic, last-ditch effort, a Grumman Duck amphibious plane is sent out the find the survivors. After successfully picking up one of the B-17 survivors, the Grumman Duck vanishes, with three men inside.

Zuckoff offers a minutely detailed, absolutely gripping account of everything that is known about the three crashes, including the brutal conditions of the survivors of the B-17 crash. The nine men aboard the B-17 all survive, but some are badly injured. They are forced to camp in subzero temperatures in the tail section of their broken plane. Expecting to be rescued within days, the men instead must face the terrifying conditions, and constant threat of frostbite and death, for 148 days.

As I read Frozen in Time I was just stunned at the tenacity of the men depicted in the book. The pain and discomfort must have been unendurable, yet somehow the men retained hope. Several times the survivors attempt to reach help, sometimes finding themselves in worse trouble in the unforgiving environment of Greenland, a place that is basically uninhabitable, plagued with blizzards,subject to sudden storms, the threat of crevasses and frostbite ever present. The spirit of these men is truly heroic.

Interwoven with the story of the three crashes, and the repeated attempts at rescue, is the contemporary narrative, in which Zuckoff recounts the efforts of the Coast Guard and North South Polar, led by Lou Sapienza, to locate and recover the remains of the Grumman Duck and its crew. Zuckoff is an integral part of this mission; even as he is acting as a reporter and historical researcher in his account of the World War II era crashes, Zuckoff becomes another character in his own narrative as the modern-day mission deals with the same threatening conditions, weather threats, and time constraints (with much better equipment and supplies).

For fans of adventure, war stories, and tales of the triumph of the human spirit, Zuckoff delivers. His writing style is fluent, he makes the complex and sometimes confusing series of events easy to understand, and he keeps the reader in suspense. As I read Frozen in Time, I kept wondering how these men continued to hope, to fight their way through one disaster after another, and to persevere. I loved the World War II history, and learned quite a bit about Greenland (never go there) and the Coast Guard. Reading this book completely satisfied any desire for an arctic adventure: I'll take my frozen expeditions vicariously.

Posted by bibliophiliac at 5:01 AM

I LOVED his previous book LOST IN SHANGRI LA but I know I'll love this one even more - I'm a huge fan of adventures in the coldest places on earth.

This is exactly the way I feel:
"I often enjoying getting some facts with my fiction, and I like to get some fiction techniques with my facts." A strict retelling of the facts is hard to wade through.I always feel that if the author can't make the event interesting why write about it?

@Lisa--The best non-fiction is just as compelling as a novel!