Review: The World We Found 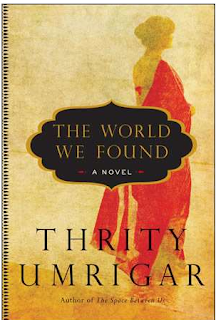 The World We Found
Thrity Umrigar
paperback, 336 pages
Harper Perennial
a copy of this book was provided by the publisher through TLC Book Tours


Thrity Umrigar was a name I had seen repeatedly, and it seemed as though The Space Between Us was universally acclaimed by readers. So I pretty much leapt at the opportunity to review The World We Found, and I wasn't disappointed.

The plot revolves around a group of friends who came of age--intellectually and politically--in college in late 1970's India. There are four female characters: Armaiti, Laleh, Kavita, and Nishta, plus the husbands and children of the women. But the heart of the book is the bond of unshakeable friendship that exists between the four women--even though they haven't seen each other in thirty years. That changes when Armaiti, who has married an American and settled in America, becomes gravely ill and wants to see her friends one last time. She contacts Laleh and Kavita, each of whom has achieved success and love. Then Laleh and Kavita go in search of Nishta, who defied her parents and convention when she, a Hindu, married Iqbal, a Muslim.

I loved the way the personal and the political intersected in this novel. Through her characters, Umrigar addresses cultural, religious, and class differences in India. She also paints a fascinating portrait of India's past and present, including some vivid scenes from the 1993 Mumbai riots. But it is the characters themselves who carry The World We Found. I loved the character of Laleh, despite her somewhat spoiled and tempramental ways. And Kavita, who has been keeping some secrets from even her closest friends is appealing in her brave movement toward a more open life.

The character who is the most moving is definitely Nishta, who has become a virtual prisoner to her now fundamentalist husband. Umrigaer depicts even Iqbal sympathetically, It would have been easy for the author to create a stereotypical villain in Iqbal, but Umrigar gives Iqbal enough complexity that I sympathized with him, even as I deplored his actions.

The conflict between Nishta and Iqbal provides the narrative urgency and supense that kept me turning the pages rapidly as I neared the end of the book. When I reached the end I just wished that the story could have kept going and going, mostly because I had come to love the characters.

I highly recommend The World We Found for readers who like a little political and cultural commentary with their fiction, and for anyone who enjoys character-driven fiction that focuses on relationships. I've already purchased Umrigar's other novels for my Nook, and I'm looking forward to reading them all.

Thanks to TLC Book Tours for including me in this tour of The World We Found.
Posted by bibliophiliac at 5:19 PM

I loved The Weight of Heaven by this author and need to make the time to get to this book. It sounds divine!

I felt exactly the same way about this one. I was really impressed with Imrigar's portrayal of Iqbal - you're right, it would have been so easy to make him one-dimensional.

I'm so glad you enjoyed this one, especially since it was your first experience with Umrigar.

sounds wonderful :-) I've heard so many good things about Umrigrar. I met her a couple of years ago at a conference but still haven't gotten around to her books. Boo!

Sold! I love books about India!