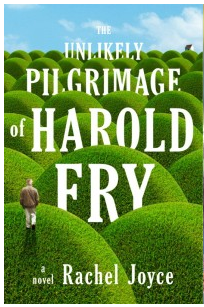 The Unlikely Pilgrimage of Harold Fry is one of those rare novels that has not got a false note in the entire book. I absolutely loved this tender, gentle story of a retired Englishman who finds himself on an unlikely journey. And I found myself falling in love with Harold Fry, who sets out to post a letter and ends up walking for eighty-seven days.


The story begins when Harold receives a letter from his former colleague at the brewery where he spent his entire career. The letter-writer, Queenie Hennessy, is dying of cancer in a hospice in Berwick upon Tweed, and she has written to Harold to say goodbye. Although Harold has not seen Queenie in twenty years, he remembers her very well. Harold's wife, Maureen, seems less impressed by Queenie and her letter--her response is to go off to her vacuuming. The reader soon realizes that Harold and Maureen have a cold and sterile marriage: Maureen sleeps in the spare bedroom, cleans obsessively, and waits for a visit from their grown son, David. Harold seems to be conscious that everything he does is irritating to his wife, and spends most of his time sitting in a chair. So it is more than surprising when Harold writes a response to Queenie, and then instead of posting it in a mailbox, he calls the hospice to give Queenie a message: "I'm setting off right now. As long as I walk, she must live. Please tell her this time I won't let her down."

When Harold sets out on his walk, he's not exactly prepared. He's in his sixties, has no preparation or training, and doesn't even have his mobile phone with him. When he calls his wife from a pay phone to explain what he's decided to do, she gives him her trademark phrase: "I think not." But Harold does find that the people he encounters on his walk believe in him:

They believed in him. They had looked at him in his yachting shoes, and listened to what he said, and they had made a decision in their hearts and minds to ignore the evidence and to imagine something bigger and infinitely more beautiful that the obvious. Remembering his own doubt, Harold was humbled.


As Harold progresses on his journey, he goes over the past, his marriage with Maureen, his thwarted relationship with his son David. He also remembers his painful childhood: his father's alcoholism, his pitiful attempts to gain his mother's attention with humor--attempts that are ultimately unsuccessful, since she abandoned him when he was still a young boy. At home, Maureen too is combing over the past, taking her own inventory, and forming a comforting friendship with the lonely widower next door.

There are so many wonderful moments in The Unlikely Pilgrimage of Harold Fry. Harold encounters kind people, like Martina, the medical doctor from Slovakia who helps Harold when he hits a physical low point. There are also more nefarious characters, like the manipulative Rich, who tries to twist Harold's journey to his own purposes. As the novel and the journey evolve, the reader delves deeper into Harold's history, as well as Maureen's (she is having her own internal journey at home in Kingsbridge).

This novel is deeply satisfying, and there are a few dark moments, as well as a few surprises. I think most readers will be captivated by Harold Fry and his quixotic journey.

The publisher is offering a copy of this novel to one lucky reader. Unfortunately, this giveaway is limited to the United States. No post office boxes, please! To enter the giveaway just leave a comment!﻿

Posted by bibliophiliac at 10:01 PM

I don't think I've read one negative thing about this book. It sounds like a gem.

Yes, like Kathy said, I've heard only amazing things about this book. Obviously I need to get to reading it, and immediately!

@bermudaonion-based on what I've read in your blog, I think you would like this book...
@Audra-it does seem to have universal appeal!

This sounds like an absolutely wonderful read - I can't wait to pick up a copy for myself!

Adding this to the list of positive reviews/mentions of this book! Initially I wasn't sure if it was one I would want to read, but the more I read about it, the more I want to pick it up.

I love the cover and the good review. I would love to win a copy

This really sounds like a great read, and everyone is seems to be saying so. thanks for the chance!

Like the other commenters here, I have heard only good things about this book! I'd love to win a copy. ofabookworm AT gmail DOT com.

I'm so happy it's summer and you have more time to read and review. This book sounds like a must read for me.

I read and reviewed this book.