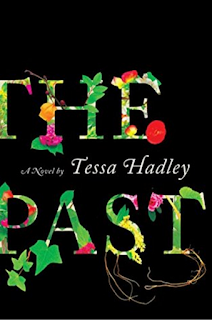 The Past is a perfectly gorgeous book of the type I used to just love to lose myself in--a lush. rich, evocative story that feels distinctively British--the kind of novel Margaret Drabble used to turn out so reliably. The Past is rich in nuance, written in prose so lush it is like an English garden in full bloom. It is the story of a family, but it is also so much more than that. It is about the way that the past is always present, the way that individuals and families can be caught up in repetitive patterns without ever knowing it, and it is about the almost mythic undercurrent to life, the rich spiritual and emotional life that goes on just below the surface.

Most of the story takes place over a three-week summer holiday. Four grown siblings (Harriet, Roland, Alice, and Fran) meet at the summer home where their mother grew up with her parents, a rather stern clergyman and his wife. The (metaphorical) ghosts of the grandparents, and especially of the mother, Jill, who died tragically young from breast cancer, haunt the gathering. Besides the grown siblings, Fran's young (and somewhat troubled) son Arthur and daughter Ivy are present, as well as Kasim, the son of one of Alice's former lovers. And to make things even more complicated, Roland has brought along his nubile sixteen-year-old daughter, Molly, and his new (third) wife, Pilar, an Argentinian lawyer.

And you thought your family was complicated.

This is enough drama for a Greek tragedy, and indeed, there are some hints of mythology and Greek drama, although much of what happens is ordinary family bickering. But there are deep wells of intense feeling too, as Kasim and Molly fall into the sensual daze of infatuation, and Arthur and Ivy explore an abandoned cottage, making up their own mythic stories and rituals (somehow ancient girlie magazines found in the cottage become a mythic and somewhat frightening and ominous presence in the inner lives of the children).

The Past casts an almost hypnotic spell. As I fell deeper into the dream of the novel, I wanted to do nothing more than lay on my bed and read this book.

One of my favorite aspects of this book was the way the character of Harriet, an introverted and sensible woman, well into middle age, falls into an intoxicating delirium of impossible love. Her passion, a kind of madness, was one of the most touching and pitiful elements of the book.

The Past is a book that seems to take place almost outside of time. The characters, mostly the younger ones, are constantly trying to get cell phone signals and then giving up. This novel hearkens back to a time when everything important took place in person, between people, or in some distance not navigated by satellite signals. This novel shows how deeply it is possible to know someone, and at the same time, how we are in in some way unknowable. The Past delves into the deepest mysteries of love, and plumbs the depths of secrets that are never told, never unfolded, except to the reader.

In the center of The Past is a section that literally takes the reader to the past--the time when the siblings were little children, and their mother was alive. I loved the surprise of this section. After getting to know the characters as middle-aged men and women, the reader is suddenly thrust into the childhood of the characters, and the mother, Jill, lost in the past, is now vividly alive.

Everything that happens in this novel is somehow informed by the past. This is undeniably true for all of us, but it isn't something most of us think of as we go about our daily lives. Tessa Hadley uses the most exquisite artistry to bring both past and present to life in this beautiful and moving novel.


Posted by bibliophiliac at 6:48 PM

Oh, I do love family drama in books. I'll have to check this out.

Oh great review! Another one for my list of books to watch for.

You are so right about the past informing our lives but us not noticing it ... it is actually something I've been thinking a lot about lately.

@bermudaonion-There is definitely family drama in this one!

@Iliana-It is such a beautiful book.