The Problem With Atticus Finch 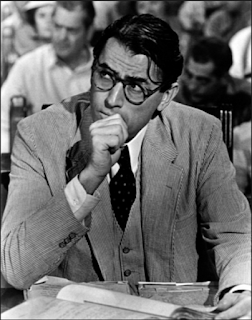 The hullabaloo over Go Set a Watchman is unavoidable, and it is a book I will definitely be reading. But my interest is cultural as well as literary, and I guess I don't hold To Kill a Mockingbird in the kind of reverence that many others do. Yes, I have read the novel, half a dozen times. I've taught the novel in my high school classroom. But I certainly don't place this book, or any of its characters, on a pedestal.

There are many things to admire in To Kill a Mockingbird. The novel offers one perspective on racism in the South. It exposes the casual racism and injustice that are still endemic. TKAM has humor, an unerring narrative voice, and great characters. And yes, Atticus Finch is an admirable man, an indelible character. Who can ever forget the scene where Atticus shoots a mad dog in the street, or the incredible grace and dignity which he displays in the courtroom. And his advice to Scout, to walk around in someone else's skin before judging them--these are all great moments.

But TKAM and its characters have their limitations. And it has always troubled me that this most revered novel is often treated as the ultimate novel about racism.

The trouble is that TKAM is written from the point of view of a white character, is written by a white author, and depicts the white world. TKAM is a great novel--I'm not disputing that. But is tells a very narrowly framed story (from a racial perspective). And much of what the novel is about (coming-of-age, family conflicts, education) exists outside the racial conflicts of the story.

The trouble is that Atticus Finch is another variation on the white savior. The character of Tom Robinson is thinly constructed--he is present as more of a symbol than a fully developed human being.

So if Atticus turns out to be more complicated, and more racist, in Go Set a Watchman, I won't be devastated. I'll be interested.

But I won't look to a single novel, or two novels, for an understanding of racism.

And I'll definitely look to black writers to tell me about the experience and effects of racism in this great, flawed country of ours.

I'll read James Baldwin: Go Tell It on the Mountain, Another Country, Notes of a Native Son, The Fire Inside. Baldwin is a truth teller.

I'll read Claudia Rankine's Citizen: An American Lyric. If you want to know and understand the felt experience of racism in America, this volume is an excellent place to start.

I'll read Kiese Laymon's How to Slowly Kill Yourself and Others in America.

I'll read Ta-Nehisi Coates, whose Between the World and Me was just published. And if you want your heart thoroughly broken, read his piece in the Atlantic, "The Case for Reparations."


Posted by bibliophiliac at 8:00 AM

You make a great point; To Kill a Mockingbird is a classic for a reason, but it shouldn't be the only place we look to understand racism. Listening to the words of people of color, who have experienced racism their whole lives, is far more important. You're totally right about Tom being more a symbol than a fully realized character in this book, which I hadn't really thought about. I wonder if this book could serve as a jumping-off point to get people to want to learn more? The recommendations you shared are fantastic.

@Leah-Thanks so much for your comments! I agree, the discussion of Harper Lee's two novels could be a great jumping-off point for discussion. Thanks for reading!

This is a great post, Lisa! I'll probably reread TKaM sometime next year and then read Go Set a Watchman. In the meantime, I'll check out some of the titles you've mentioned here.

@JoAnn-Thanks! Just finished reading Go Set a Watchman, and now looking for the antidote. It was even worse than I expected. Review soon.

Well said! I still love Atticus, though, for all of his complexities. Even while we're admiring him for being a father that sets such a wonderful example, he is also a father who doesn't seem in the least capable of actually taking care of his children's day to day needs.