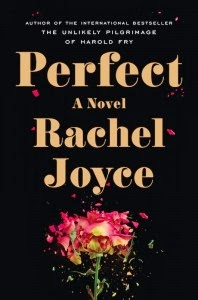 Readers who fell in love with The Unlikely Pilgrimage of Harold Fry will find that Rachel Joyce's debut effort was no fluke. Maybe it is the writer's background as an actor in the Royal Shakespeare Company, but Joyce has a knack for creating quirky and convincing characters. After reading The Unlikely Pilgrimage of Harold Fry, I found myself recommending the novel as an antidote to depression or the readerly blahs. In Perfect, Rachel Joyce has crafted a much darker story, but there is still a persistent optimism at the novel's core.

Byron Hemmings is an eleven-year-old boy living a seemingly perfect life. His mother, Diana is perfectly beautiful; her golden hair and her slightly old-fashioned pencil skirts set her apart from the other mothers in the English village where the family lives. Byron's father, Seymour, works all week in London to afford the largest house and the newest Jaguar in the county. Byron and his youngest sister, Lucy, seem to have a completely idyllic life. The only worry Byron has is the extra two seconds his friend James has told him about: it is a leap year, and the newspaper has reported that two seconds will be added to the clock. It is 1972, and time is "out of joint with the movement of the earth."

On a foggy morning, Byron and Lucy argue about cereal in the morning, their mother packs them into the Jaguar for their trip to school, and there is a traffic jam. Diana turns down Digby Road, a route Seymour has forbidden the family to travel, and a perfect life is changed forever. Byron sees a little girl on a red bicycle, Diana swerves, and then, without noticing that everything has changed forever, continues on her way.

Joyce expertly manages the tension and suspense that develops out of the mysterious accident that only Byron seems to have noticed. No longer trusting his parents or the perfect world they have built for him, Byron turns to his friend James. What happens when two eleven-year-old boys try to navigate the adult world? What happens when two boys try to fix a problem they don't really understand?

As the perfect life unravels, the reader begins to see that Diana has secrets and a past that her husband has tried to erase. She is not quite like the other mothers, although she carries a notebook, meticulously writing down bits of information and household hints that will make her appear to be what the other mothers really are.

The story of Byron and James trying to save Diana is told from Byron's point of view. James clearly adores Diana, and knows that she is perfect. It is his mission to help Byron preserve Diana's perfection, and unfortunately everything the boys do toward that end has unintended consequences. At the same time, Joyce weaves in a parallel story of a man named Jim, living in the same village forty years later, and struggling with the effort of daily life. At age sixteen, Jim entered Besley Hill, an institution where he underwent electroshock therapy. After being in and out of Besley Hill for most of his life, Jim lives in a campervan by himself and struggles for a normal life.

Perfect has a lot going on, with two engrossing parallel narrative that the reader realizes will eventually merge. As the novel progresses, Joyce ratchets up the tension, and there is a sense of inevitability to Diana's fate, as well as that of her somewhat ungainly and lost son. But the kind of eternal optimism and compassion that was at the center of The Unlikely Pilgrimage of Harold Fry gives Perfect an unexpectedly redemptive ending. Rachel Joyce has an inimitable style, and Perfect is another example of a quirky story that is by turns dark and enchanting, with compassion at its heart.

For more information about Rachel Joyce and her books:
racheljoycebooks.com

Posted by bibliophiliac at 7:47 AM

Such an interesting book!

@Lisa-I'm thinking that Rachel Joyce will become one of my favorite authors. She offers something different....a very distinctive voice.

"dark and enchanting, with compassion at its heart" sounds like a wonderful combination to me!