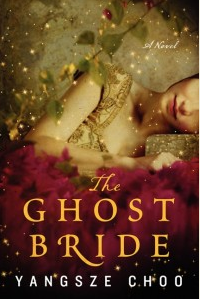 The Ghost Bride
Yangsze Choo
William Morrow
hardcover, 368 pages
a review copy of this book was provided by the publisher through TLC Book Tours

The Ghost Bride, Yangsze Choo's debut novel, blends the historical novel with Chinese folklore and romance to create an enticing and enchanting tale set in Malaya. The time is 1893, and Li Lan is living a quiet life with her opium-dependent father and her elderly Amah (a servant...something like a nanny or housekeeper) in the port city of Malacca. One evening, Li Lan's father asks her whether she would like to become a ghost bride. The wealthy Lim family's son--a young man named Lim Tian Ching--has died, and the family has inquired about this unusual type of marriage, a practice of arranging the marriage of a deceased person to a living one.

This suggestion that Li Lan might be a ghost bride for the Lim's dead son is one that the daughter and father dismiss pretty readily. But soon the Lim family is showing great interest in Li Lan, inviting her to their opulent mansion. There Li Lan meets the attractive nephew (and heir to the Lim family fortune) who interests her far more than the dead Lim son.

While Li Lan is interested in Tian Bai (who also shows signs of some interest in her), she begins to have some disturbing dreams. In these dreams, the dead Lim Tiang Ching begins to visit her, telling Li Lan that she will be his wife. As the dreams become more elaborate and disturbing, Li Lan has a troubling sense that these are no ordinary dreams. And as Li Lan gets to know the Lim family (in the world of the living, and the world of the dead) she begins to uncover some family secrets.

Yangsze Choo has created a beautiful and highly original world in her novel, a world that blends the real historical Malacca with a parallel spiritual universe---a world of dreams and folklore, ghostly spirits, oxen-headed demons, and a mysterious stranger in a bamboo hat. Li Lan finds herself embarking on a dangerous adventure, traveling back and forth between worlds. Yangsze Choo convincingly builds a world of  spirits and ghosts, a place with its own complicated set of rules and its own dangers.

Posted by bibliophiliac at 8:11 PM

This is a book I must definitely read soon.

@Sam-It was great! Hope you have a good school year.

I think this has to go on my wish list! I'm such a fan of Asian themed books. I love learning about the culture, the settings, etc.

"highly original" is highly unusual and hard to find, so I'm definitely intrigued!