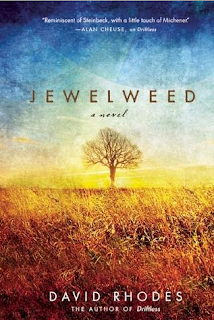 Jewelweed
David Rhodes
Milkweed Editions
hardcover, 449 pages
$26.00
published May 2013
I purchased my copy of this book from my local bookstore

I've made no secret of my adoration for writer David Rhodes and his work. I first heard about Rhodes in Poets & Writers Magazine (much of my TBR list comes from this magazine). P&W is one of two magazines I subscribe to (The Sun Magazine is the other), and the articles and interviews are reliably good. Back in 2008 P&W ran a profile of Rhodes, along with an interview (Kevin Larimer was responsible for both). I wrote down the titles of a couple of books (Rock Island Line and Driftless); I didn't read the books right away, but the articles and the book titles stuck in my mind. When I finally read Rock Island Line and Driftless in 2010 I was gobsmacked. Rhodes was every bit as good as I'd hoped, and his novels spoke to me very directly. I slathered praise all over Rock Island Line and Driftless in my posts, and now I'm about to do the same thing for Jewelweed.

Rhodes returns to the geographic and cultural territory of Driftless in Jewelweed; much of the action takes place in and around the small rural town of Words, Wisconsin. Many of the characters from Driftless appear in Jewelweed, notably pastor Winifred Helm, her husband Jacob Helm, and a new character, their precocious son August. The main plot revolves around Blake Bookchester, a prison inmate who has been locked up for more than a decade on drug charges. Blake (his name is clearly meant to evoke visionary poet and artist William Blake) is about to be released (thanks to Winnie's intervention). Blake has spent his time in prison reading Spinoza and trying not to be dehumanized by a system created to dehumanize him.

Rhodes paints a big canvas in this novel; there are several different plot-lines going, and the characters are like a big ensemble cast, with each character having his or her story. There's Blake's father, Nate, a good-hearted trucker who wants his son to blend back in to life on the outside. Nate is an appealing character, and one subplot has him chasing a flavor from his past....literally. A bite of mashed potato Breakfast pie in a diner activates a nostalgic longing that turns out to be romantic--and troubling to Nate. There is Danielle, known as Dart, Blake's former lover, now a single parent of Ivan (who is August's best friend). Then, through Dart and Ivan, in an unlikely but believable plot twist, there is a wealthy family living in a mansion adjoining a pond where a prehistorically vicious turtle lives. In the mansion are: a preternaturally tall man; his very tall wife; Kevin, a teenage boy with cystic fibrosis; the tall man's father; and the tall woman's grandmother. Each character has some quirk or habit that is memorable. I loved Wally, Kevin's grandfather, who carries around a small notebook where he writes down all the things he will miss when he dies. We all need a notebook like that.

Wait, I'm not done with my list. I forgot to tell you about the veteran hermit living in the woods with a gun collection inside his home made from hay and earth. The icky and obnoxious lobbyist named Lucky. And the Wild Boy who lives in the woods (Ivan and August are determined to find him).

Who is not in this book: urban dwellers, anyone from either coast, people with heated garages. Jewelweed is about the kind of communities that epitomize the Midwest: communities made up of interwoven relationships, communities where people often do help each other. Here's Nate musing about why he believes in the existence of the Wild Boy, while a tourist from Minneapolis doesn't:


Nate easily dismissed these people. They were usually the same folks who owned heated garages. Something about keeping their cars warm seemed to kill a vital agency inside them. First, a false realization of their own importance had dulled their natural senses until they no longer heard the geese flying at night. Next, they walked without stopping past jewelweed in late summer bloom, having no time for ditch beauty. And then, fully heated garages finished them off. Of course they didn't believe in a boy sleeping in caves and roaming through untended fields, his eyes filled with an ancient, shameless wonder. If there were such a child, his untaught contentment would mock everything they had traded their souls for.

Rhodes uses the techniques of realism so beautifully, that it is unexpected when he occasionally leaps into the mystical realm. But then, his main character is named for a visionary poet who saw angels. Blake Bookchester is definitely my favorite character in Jewelweed (although I certainly have warm feelings for Ivan, Dart, and August). Blake's need and desire for redemption was so real, and his obstacles (including his own impulsiveness) seemed so insurmountable, that I was on tenterhooks all the time. Blake has a tender but difficult relationship with his father. He longs to reconnect with Dart, who was his lover at the time he was sentenced. His only real ally is Winifred, who visited him in prison, brought him books (he's into Spinoza) and got her husband, Jacob, to give Blake a job (which Jacob does quite grudgingly). Almost everyone, including Blake, believes that Blake will fail at his transition to the outside, and end up back in prison.


Last night, lying in bed, Blake remembered how in prison, when he couldn't sleep, he'd pictured riding along the rustic road between Luster and Red Plain--twenty miles of curving, climbing, plunging, and twisting, through mostly uninhabited woodland. Lying on his cell bunk, he'd recalled every detail he could remember of the once-familiar road, like fresh water from a deep well: ditches, bridges, intersections, grades, slopes, straightaways, humps, dips, fences, gorges, and hillsides, even trees reaching out toward the road and the changing view of the horizon. With sufficient concentration, the remembered trip could take over an hour, and often provided the hypnotic solace required in order to fall asleep. With years of devoted repetition, more details emerged, and the refuge he found in the imagined journey became even more welcoming.

He wanted to take that same ride now, to coax the imagined route out of his memory and thank it for the sanctuary it had once provided, joining his past to the present in a way that would cleanse his world of the reasons he had needed a sanctuary in the first place, enabling him to really start over.

Blake decides to restore his old motorcycle, and it's just one more thing that may or may not get him into trouble with the parole officer who seems determined to catch him doing something wrong.

Jewelweed is a jewel of a book. It has feeling, beautiful sentences, and characters who will become a part of your heart. Rhodes reminds me a little of Steinbeck at times (the concern with social justice, the large canvas) but then he'll suddenly get quite mystical and even magical. Rhodes is his own man, a deeply human, deeply spiritual writer. He writes about ordinary people (the best kind) with enormous compassion and heart.

And the wonderful Milkweed Editions, which brought all of David Rhodes's books back into print, and has published the recent novels, has more good stuff about Rhodes here.