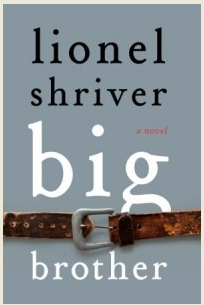 Big Brother
Lionel Shriver
Harper
hardcover, 384 pages
a copy of this book was provided by the publisher through TLC Book Tours

Big Brother is an uncomfortable book. This is not one of those books that you will lose yourself in, at least not in the escapist sense. Instead, Big Brother presents some of the most discomforting, troubling aspects of modern life in a way that will make you think. Lionel Shriver, author of So Much For That, The Post-Birthday World, and We Need to Talk About Kevin, takes on the highly charged topics of eating and weight, as well as sibling relationships, success, and celebrity, in her latest novel. Throughout the novel, Shriver pulls away layer after layer of self-deceit, exposing the ways in which each of her characters, and by proxy the reader, conceals uncomfortable truths.

The plot revolves around the relationship between a brother and sister, but it expands to include a much larger cast of characters. Pandora and Edison are the oldest children of a one-time sit-com star, Travis Appaloosa. They also have a younger sister, Solstice, who is peripheral to the plot and to their lives. The three children have fictional, sit-com doppelgangers, and Pandora and Edison are haunted by the sit-com family that was, but wasn't, their family. Emotionally abandoned by their narcissistic father, Pandora and Edison's childhood was further fractured by the death of their mother. The novel begins when Edison visits Pandora in Iowa, where she has become unexpectedly successful and somewhat famous. Pandora is used to looking up to her hip, jazz pianist brother, so she is shocked when he brother shows up at the airport weighing in at 387 pounds.

Things get even more uncomfortable when Pandora brings Edison home: her husband, Fletcher, is a custom-furniture maker who zealously avoids unhealthy foods and bicycles maniacal distances. Fletcher's response to Edison's hefty presence is decidedly not welcoming. And Pandora's stepchildren, Cody and Tanner, don't know quite what to make of their newly unrecognizable uncle.

Pandora has her own problems: tension is building in her marriage. Her surprisingly successful business (a passive-aggressive outfit called Baby Monotonous, that manufactures dolls for adults) creates friction between her and her piously healthy husband. Her stepdaughter, Cody, is so shy she is forced to join a club for shy children and given "strategies" for being more like her peers. And Tanner, a high school senior, is prematurely jaded and on the verge of dropping out. When Edison lumbers into this family's lives, he creates a big, uncomfortable dent in the family.

Much of the novel focuses on Edison's mystifying obesity, his food addiction, and then the challenge that Pandora takes on when she decides to help her brother lose the weight that she fears will end up killing him. The dieting chapters take the reader on a roller coaster of euphoria and despair, and the writer makes some compelling points about our society's disordered relationship with food and eating:


You couldn't help but wonder what earthly good was a microprocessor, a space telescope, or a particle accelerator, when we had mislaid the most animal of masteries. Why bother to discover the Higgs boson or solve the economics of hydrogen-powered cars? We no longer knew how to eat.

Pandora's decision to move out of the family home and into an apartment with Edison in a desperate attempt to help her brother lose over two-hundred pounds is difficult to understand. And yet it is also completely understandable:  the urge to try to save another person, to cure the disease, the addiction, that seems poised to take that person's life. Pandora's drastic solution is to take Edison on as her project, with the aim of coaching him back to his ideal weight of 163 pounds. This decision seems both brave and pitiful, and seems guaranteed to put an end to Pandora's marriage, and perhaps her sense of self.

By this time in the narrative, I was starting to view Pandora with a certain amount of resentment. As a narrator, Pandora was beginning to strike me as suffocating, passive aggressive, falsely modest, and maddeningly unaware of her own flaws. And Edison was gratingly slobbish, annoyingly entitled, and maddeningly unaware of the destruction he was wreaking on himself and others. But there is no narrative more compelling than that of the journey of self-improvement. There's a reason why audiences love shows where contestants compete to lose weight: everyone loves a loser, as long as they are losing pounds.

What becomes of a society when abundance, affluence, and leisure become widespread? We have become a nation of hoarders and gorgers. The tension steadily builds in Big Brother as one character after another is revealed to be struggling with a desire for control, and a fear of losing control. Pandora's long riff on how we judge ourselves and others based on eating habits and degrees of slenderness is painfully accurate. And our narrator, Pandora, has her own mechanisms for avoiding painful truths. The gigantic scale she buys, with its oversize dial and numbers, represents an accuracy that most of us try to avoid. As another customer tells her,  sometimes self-deceit is all that keeps people going.

Big Brother has a dramatic narrative twist: there is no way to talk about this book without at least mentioning that fact. After getting to nearly the end of Pandora's narrative, I had begun to feel more friendly toward her, but still there was that friction, that tension, that this character both needed in her life and created in this reader. At one point in the novel, Pandora tells her brother that he can't rewrite history. That is an ironic statement given everything that follows.

Big Brother is a novel that will appeal to readers who like thinking about larger social problems from more than one point of view. The topic of obesity, eating disorders, and our very disordered relationship to food and eating are all examined with compassionate yet meticulous attention. The question Pandora and her family ask about Edison (how did he get this way?) could also be asked about our larger (heh) society. How did we get to this place, where the simple act of ingesting food has become so fraught with social disapproval, emotion, fear, and danger? How did so many people get so fat so fast, and why? Big Brother doesn't really answer such questions, but it certainly looks at the topic in new, nonjudgmental ways. And while the characters weren't always the most adorable people, they were very real, and their problems and conflicts were compelling and believable. Big Brother kept my mind working away long after I closed its pages.

Posted by bibliophiliac at 4:55 PM

I thoroughly enjoyed this review--it piqued my interest. I've never read anything by Shriver, but if any title were to draw me, it would be this one. Lots of ambiguity, which I love in a novel.

I'll have to pack it in next to a beach read this summer.

@Judith--Exactly! "Lots of ambiguity" piques my interest too!

I don't always feel that Shriver manages to be nonjudgmental or compassionate and I can really be put off by her. But if she manages that her, I may need to give this one a chance.

@Lisa--This book just gave me so much to think about. And, yes, I do think Shriver managed to be nonjudgmental. I would definitely read more from this author....

Wow, Shriver certainly tackles a lot of big topics in this book! I'm glad that you enjoyed it even though it was distinctly uncomfortable to read.

I only skimmed this review because I'm a big Lionel Shriver fan and I'm really looking forward to reading this one.

@Ryan--this was the first book I had read by Shriver, but I will be reading more of her books. I especially appreciate the fierce intelligence of her writing.

@leeswammes--thanks! your's was great too :)

This book was definitely so very uncomfortable to read. I had many of the same feelings towards Pandora as well. And then that ending! The story still weighs on me several weeks later and I can't wait to read more from Shriver (this was my first!). Awesome review!

@Brooke--I love finding a writer who can lead me to sit in that discomfort and Shriver does that so well. I went and picked up We Need to Talk About Kevin the other day....I think I'll be working my way through all of her books.

After I read the book, I read a NYT interview with her where she said she eats one meal a day and sounded quite judgmental. I think it is interesting that she managed to keep that at bay while writing the book - there was quite a bit of compassion for Edison in this novel

I have a brother-in-law who is extremely overweight now ... he has heart problems and complains a lot about things, but doesn't appear to want to do anything about it. I suggest (when prompted) that he try walking half a block, rest, then walk back and work until he's able to circle the block and more. But he doesn't do it. I can't imagine abandoning my own life for someone who is unwilling to help themselves, but I do agree that overeating and obesity are a huge problem (no pun intended) here.

@Booksnyc-I read that interview too, after I wrote my review. My impression is that Shriver is just as conflicted as the rest of us when it comes to the topic of weight and food, which makes her novel even more impressive.

@Julie-weight loss is one of those things that we just can't do for other people. It is frustrating. I think a feeling of helplessness and hopelessness sets in for the morbidly obese. On the other side of it, I have a family member who suffers from an eating disorder, and it has been extremely distressing to watch her become dangerously thin. Fortunately she is getting professional help. It is very puzzling that eating disorders at both ends of the spectrum are so prevalent--I think that's why this novel touches a nerve in so many readers.