To Read Again: Confessions of a Rereader 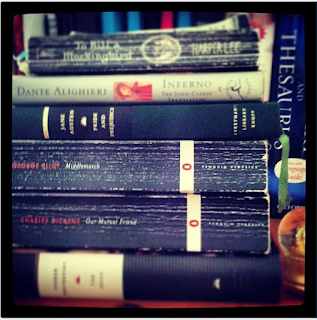 Readers--not the casual readers, but the committed, obsessed, relentless readers--have a few little testy points of contention that seems to get repetitively rehashed: some readers write in their books compulsively, while others like a pristine page; some readers use bookmarks, while others dog-ear pages (this is sacrilege to some!). One of those divisive issues is rereading. Let me now confess: I scribble madly in my books, guiltily dog-ear pages (only on desperate occasions, but I do it), and I am an obsessive rereader. To some readers this is just a foolish waste of time. So many books, so little time! But nothing gives me deeper pleasure than rereading, sometimes for the fifth or even the tenth time, a beloved book. And rereading usually leads to excessive underlining, scribbling, and spine-cracking.

When I reread a book, I encounter that book as an older, somewhat different person. Middlemarch, one of my most frequently reread books, is quite a different experience for this older, twice-married mother and teacher from the Middlemarch I read as a college junior. Likewise, the relatively innocent high school me had quite a different take on Dostoyevsky's The Idiot from the grown-up, somewhat more jaded me of two years ago. And some books (The Great Gatsby) I've read so many times that now I just pick them up and wander around in them, like a visitor to a house I've been to many times. I don't always go in the front door, and I don't always read to the end.

Why do I reread? I honestly don't think I can fully appreciate any book on just one reading. Not every book merits a rereading, and I certainly don't have the time or the inclination to reread every book that I like or even love. But if a book is truly great, or if it truly speaks to me on the most personal level (or both), then I want to reread that book so that I can get the most possible from that book. This all probably reflects something about my personality and my temperament as well. And being a teacher, I often have to read a book more than once (I always reread a book when I am teaching it). Since I have some choice in what I teach, I will often choose to teach a book I love (Gatsby), and end up reading that book over and over before I'm ready to move on to something else in my curriculum and my life.

Jane Eyre by Charlotte Bronte *
Wuthering Heights by Emily Bronte
Madame Bovary by Gustave Flaubert *
Middlemarch by George Eliot **
Pride and Prejudice by Jane Austen *
Emma by Jane Austen
Frankenstein by Mary Shelley *
Their Eyes Were Watching God by Zora Neale Hurston **
The Great Gatsby by F. Scott Fitzgerald **
The Idiot by Fyodor Dostoyevsky
The Adventures of Huckleberry Finn by Mark Twain
To Kill a Mockingbird by Harper Lee **
Inferno by Dante Alighieri
The Scarlet Letter by Nathaniel Hawthorne
The Sound and the Fury by William Faulkner **
As I Lay Dying by William Faulkner **
Beloved by Toni Morrison
Sula by Toni Morrison
Song of Solomon by Toni Morrison
Black Boy by Richard Wright
Grendel by John Gardner
The Narrative of Frederick Douglass by Frederick Douglass

Here's a list of books I already know I must reread:
Our Mutual Friend by Charles Dickens
The Way We Live Now by Anthony Trollope
The Border Trilogy by Cormac McCarthy
Crime and Punishment by Dostoyevsky
Lolita by Vladimir Nabokov
The Grapes of Wrath by John Steinbeck
East of Eden by John Steinbeck
Once Upon a River by Bonnie Jo Campbell
A Seahorse Year by Stacey D'Erasmo

What's your stance on rereading? Do you have a favorite book that you have read over and over again? Or do you think life is too short for rereading?
Posted by bibliophiliac at 2:28 PM

I love rereading! :) I used to do far more of it pre-book blogging, though. I've been meaning to increase my first read/reread ratio for years now but seem to hover around 5-10% rereads. Which seems awfully low! Anyway, I love rereading for the same reasons you do.

When I was a kid, I reread books all the time. I remember that my mother couldn't understand how I could read the same books so often. Nowadays, I often mean to reread book, but, as you said, so many books, so little time! Generally when I reread stuff now, it's because I find it comforting and easy, like Harry Potter. If I want to be challenged, I read something totally new. But I do WANT to take the time out to revisit some beloved classics, it just doesn't happen very often...

@Eva-it does seem as though book blogging increases the pressure to read whatever is new, or to read books to review (as opposed to reading just to understand more deeply)....

@Jennifer-my rereading habit definitely started in childhood too...there were some books that were comfort reads, and I would read those over and over and over.

I don't reread much but you make such a compelling argument for it. I'm tempted to put aside my books for review and pull out a book I've loved right now.

@Lisa-a new book is always a risk! A beloved classic usually rewards the effort...but the disappointment is keen when a book you once loved, disappoints....but that is another post!

I don't read review copies, so it's not so much pressure as "Ohhh! Look at this new and shiny thing!" that somehow makes me forget to reread. ;)

I am definitely a fan of rereading. The books I reread are mostly "comfort reads". If I'm really stressed out, I can pick them up and read them in a sitting or two and knowing how they end and that I'll always love the stories and characters always helps with my stress :)

@Kelly--Yes, definitely yes! Rereading helps me with stress too. Ideally I would reread one of Trollope's wonderful books, and relax with the characters that I know so well. I love the fact that the same characters reappear from book to book, so they become like old friends.

I love to reread my favourite books. People ask me why since I already know the outcome but to me it's not all about the plot. It's about spending time in a setting I love or with characters I've come to love, and in many books it's for the sheer pleasure of the wonderful writing. Some writing just makes you happy to read it, whether it's the way the words are put together or the images they evoke or the way it makes you feel. I don't think anything that gives you joy is a waste of time. I only wish there was more time for it.

I've got a project in which I reread Middlemarch every ten years. Next time is 2019.

I re-read Little Women again this year. I also like to reread The Thorn Birds and Gone with the Wind.

My name is Bybee and I'm a re-reader.

@Ordinary Reader-I agree...when you reread, you already know the plot, so you can focus on writing, on all the things you didn't pick up on the first time around. Knowing how a book ends has never *ruined* a book for me!

@Bybee-Middlemarch is my number one reread! I think I've read it either three or four times now. I just read The Postman Always Rings Twice this year, and I can easily see myself rereading that one.

I WANT to be a re-reader but I admit that I fall victim of that "too many books, not enough time" conundrum. I just finished my fourth read of Great Gatsby which now makes it my most read book (after Wuthering Heights which clocks in at three reads) and I would certainly re-read it again. Of course it helps that it's 189 pages long. I think my copy of Our Mutual Friend is 800 pages and twice was enough at the time...

I have considered dedicating 2014 to re-reads with the exception of book club books but I think that'll fall to the wayside quickly. Old habits die hard...

@Trish--I know what you mean! New books always do sound enticing, especially when everyone is talking about them. I have my list for the Classics Club, and I put quite a few rereads on that list, and then I will just suddenly remember how much I loved a certain book and be moved to read it again. I really go back and forth....

I am not a big re-reader, but when I DO reread, I really enjoy it! I reread To Kill a Mockingbird and was just blown away now that I understand more of the context in which it was written and in which it was set.

@Aarti-To Kill a Mockingbird is definitely one of those books that I will always reread every few years.