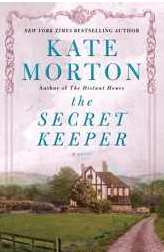 The Secret Keeper
by Kate Morton
Atria Books
Simon and Schuster
484 pages
26.99
a review copy of this novel was provided by the publisher

The Secret Keeper is an expertly plotted pager-turner that this reader simply could not put down. My apologies to all the students who were waiting for their papers to be graded: I could not stop reading this book. Kate Morton's fourth novel weaves together two romances, at least three separate historical time periods, and two continents in a seamless and perfectly paced narrative.

At the heart of this novel is a secret. Laurel Nicolson is sixteen when The Secret Keeper opens with a pivotal moment in her adolescence: she is experiencing her first romantic crush, she has found her life's vocation (acting), and she is staging her first small rebellion against her close and loving family. While her parents and sisters celebrate her brother Gerry's second birthday with a family picnic, Laurel is hiding out in the family treehouse, daydreaming about her new boyfriend, and plotting her escape to London and drama school. From her hiding place, Laurel witnesses a violent crime which is reported, but then swiftly swept under the carpet, and kept secret from her siblings. Fifty years later, Laurel's mother Dorothy is dying, and Laurel finds herself seeking answers to this central mystery of her mother's life: who was the stranger who approached the Nicolson family farmhouse one summer afternoon, and was his death accidental or a murder?

Kate Morton creates a mesmerizing and contradictory character in her portrayal of Laurel's mother, Dorothy (Dolly). One strand of the narrative follows Dolly from her late teen years in Coventry, living with her utterly conventional family to her adventurous war years in London. There the impetuous, beautiful Dolly works as a companion to a wealthy invalid and pursues a friendship with the elusive and glamorous Vivien Jenkins. Also in London is Dolly's love interest, Jimmy Metcalfe, a photographer who is documenting the effects of the war on the residents of London. Morton's depection of World War II era London is wonderfully evocative, and she captures the urgency and moral ambiguity of ordinary people in extraordinary times.

Morton shifts back and forth between Dolly's story and her wartime experiences, including her romance with Jimmy and her longing for the glamour of upper-class life, and the contemporary story of Laurel trying to solve the mystery of her mother's life and past. The parallel narratives heighten the suspense and keep the reader riveted to the page. As I became more involved in The Secret Keeper I found my sympathies shifting, and I loved the artful way that Morton developed her characters. The secret referred to in the novel's title is the linchpin of the book, and Morton kept me guessing right up until the very end. This is a beautifully written, fast-paced novel with plenty of depth. Highly recommended for fans of historical fiction and literary fiction,

I don't read a lot of historical fiction but this book sounds exceptional so I may have to give it a try.

@bermudaonion-this is really an ideal book club book. As I was driving to work this morning I was imagining the great discussions this novel would prompt!

@wordsandpeace-Yes! I so loved this book--I'm very glad I got to read it.

I loved this book too! Wasn't the characters just awesome and the ending!?!?! Jaw dropping.