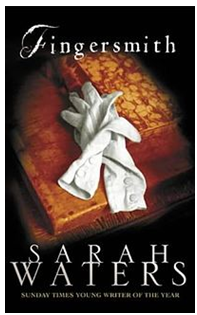 Sarah Waters is something of a magician. Her books continue to work in my mind long after I've finished reading them. It's kind of like what happens when you cook something in the microwave: you're supposed to let it sit for a few minutes, because even after the microwave has finished "cooking," there's still some cooking going on inside.....That's what seems to happen in my brain with the books of Sarah Waters.

I first noticed this phenomenon last summer when I read Fingersmith.﻿ As in each of the Waters novels I've read, identity is a theme in Fingersmith. There are so many twists and turns in the plot of Fingersmith that the reader is constantly being thrown off balance--and I mean this in the best way possible. The book is so well written, and so entertaining, that I didn't realize just how sneaky Waters is until I finished the novel. She just makes you think on so many different levels. 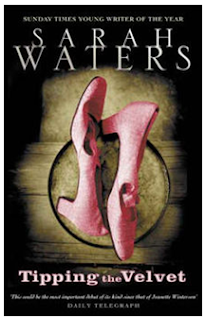 This summer I finally got back to Waters. First I read her first novel, Tipping the Velvet, a wonderful bildungsroman about a young woman who falls in love with a "masher," a woman who impersonates men on the music hall stage. Like Fingersmith, Tipping the Velvet is set in Victorian London, and has a lesbian protagonist. Waters has a PhD in English Literature, and her dissertation on lesbian and gay historical fictions from 1870 to the present; her research obviously informs her first few novels.

I enjoyed Tipping the Velvet, despite the main character (Nancy Astley, known as Nan) sometimes coming across as terribly selfish and even brutal. Nan is still a sympathetic character, and the depths to which she is driven illuminate both the social mores of the times, and the themes of the novel.

Reading Waters has made me wish I were still in a book club--her books leave me urgently wanting to discuss--and there is so much to discuss.

One thing I noticed in Tipping the Velvet is the way Waters will build up an idea in one long, extended paragraph, and then have a very short, powerful paragraph of just a sentence or two. For instance, when Nan is describing how she became part of her lover, Kitty's music hall act, she builds the idea slowly, describing her fear and her reluctance. Then comes this:

The truth was this: that whatever successes I might achieve as a girl, they would be nothing compared to the triumphs I should enjoy clad, however girlishly, as a boy.

I had, in short, found my vocation.

When Nancy Astley becomes Nan King, she begins the slow journey to uncovering her true self--but it is a long and painful journey, with some bitter and even violent stops along the way.

After finishing Tipping the Velvet, I immediately wanted more of Sarah Waters: then I remembered that I had The Little Stranger on my Nook. 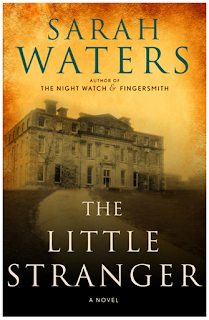 Once again, in the world of Sarah Waters, nothing is as it seems. Then you think you've figured out what is behind the semblance of reality, and then that, too, is exposed as illusion or deceit. So cool.

The Little Stranger was a book I had vaguely heard good things about, and I had an idea it was a kind of ghost story. It's sort of a ghost story, the way that The Turn of the Screw (the only book that bears comparison) is a ghost story. Meaning, the novel is oh so much more.

Unlike Tipping the Velvet and Fingersmith, The Little Stranger is set in the period immediately following World War II. And whereas the other two novels have female protagonists/narrators, the narrator of The Little Stranger is a strangely bland, middle-aged doctor practicing medicine in a country village. He gets called out to attend to a servant at The Hundreds, a great house owned by the local impoverished gentry, who are struggling to maintain what is left of a crumbling estate.

The narrator, who is referred to only as "Dr. Faraday"--I thought this was weird, and significant; why doesn't this character have a first name?--has been to The Hundreds before. His mother, who was once a nursemaid at The Hundreds, brought him inside the house just once when he was a child, and he took that opportunity to vandalize the house, prizing loose a plaster acorn with a pocket knife.

This seemingly accidental connection, and the seemingly accidental return of Dr. Faraday, lead to a ever closer relationship between Dr. Farrady and the Ayres family. Roderick, the young squire, is scarred and damaged by the war; his sister Caroline is an awkward spinster who the family is trying to marry off. Mrs. Ayres is haunted by loss--of her late husband, and of the daughter who died many years ago. Faraday's arrival into the midst of this family coincides with a series of eerie, unsettling, and finally dangerous events. Waters expertly builds suspense and a chilling sense of forboding--but again, even the unsettling and the weird has a way of becoming even more unsettling and more weird in the most unexpected ways.

The Little Stranger is more than just a ghost story--in fact, maybe it isn't a ghost story at all. The novel is about class resentment, the end of a way of life, and the unconscious evil that can be harbored by even the most mundane soul.

Herein ends the general audience part of this post....Now we enter the room reserved for SPOILERS....

So, why doesn't Dr. Faraday have a first name? Doesn't it seem rather strange that Caroline never calls him by his given name, even after they are (sort of) engaged?

And isn't the relationship between Dr. Faraday and Caroline strange, strained, and rather forced? At times it is as if the doctor is trying to overpower Caroline, or even punish her for her wealth and privilege. And the scene in the car after the dance--Dr. Faraday comes dangerously close to date rape, but doesn't show the slightest awareness that he has pushed that limit.

Isn't it odd that the troubling events in the house don't really begin until Dr. Faraday begins coming to the house? Is it the house that is evil, or something else?

Remember the conversation that Dr. Seely has with Dr. Faraday? He tells Faraday that maybe someone in the house unconsciouly sends a malevolent spirit to create chaos. Then this happens:


It was two a.m., on what should have been my wedding night. I was meant to have been lying in a train by now, with Caroline in my arms.

The loss and the grief rose up and swamped me, all over again. It was just as bad as it had ever been. I didn't want to go home to the empty bedroom in my cramped and cheerless house. I wanted Caroline; I wanted Caroline and couldn't have her--that was all I knew. I had joined the Hundreds road by now, and the thought that she was so near, and yet so lost to me, made me shake......I reached the turning into the lane that led to that shady overgrown pond. I took it, and bumped along the track, and parked where Caroline and I had parked that time--the first time I had reached to kiss her and she had first pushed me away.

.....I began to feel out of time and out of place, and absolute stranger....I sank into a fretful sort of slumber....And in the slumber I seemed to leave the car, and to press on to Hundreds: I saw myself doing it, with all the hectic, unnatural clarity with which I'd been recalling the dash to the hospital a little while before. I saw myself cross the silvered landscape and pass like smoke through the Hundreds gate. I saw myself start along the Hundreds drive.

But there I grew panicked and confused--for the drive was changed, was queer and wrong, was impossibly lengthy and tangled with, at the end of it, nothing but darkness.

Of course two a.m. is just when Caroline is climbing to the second floor; and then Betty hears Caroline call out: "You!" and Caroline falls to her death.

Is it Dr. Faraday's spirit, unconsciouly resentful, malevolent, and frustrated with longing, that Caroline sees? Why doesn't Faraday mention that he was parked in his car near the Hundreds when his friend Dr. Graham asks about where he was during the night?

And these are probably the most revealing lines of the novel, the last sentences:


If Hundreds Hall is haunted, however, its ghost doesn't show itself to me. For I'll turn, and am disappointed--realising that what I am looking at is only a cracked window-pane, and that the face gazing distortedly from it, baffled and longing, it my own.

Isn't the reader left to conclude that, seemingly without being aware of it, Dr. Faraday himself has been haunting The Hundreds, and has caused the madness of one occupant, and the deaths of two others?

Exit the Spoiler Zone.....
Have you read anything by Sarah Waters? Do you agree that her writing is amazing? What was your favorite book?
Posted by bibliophiliac at 3:01 PM

I just read The Little Stranger and it's absolutely the doctor. Isn't that creepy? I loved the book so much I'm gonna follow up with two of hers that I have on the TBR very soon (Fingersmith and The Night Watch).