Review: The Thing About Thugs 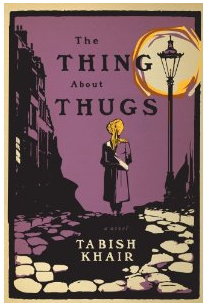 This is one of those books that I like more in theory than in practice: I liked the idea of The Thing About Thugs better than I liked its execution. The Thing About Thugs is as much about the nature of storytelling and identity as it is about one particular narrative. In fact, the narrative is deliberately kept open-ended. The Thing About Thugs weaves together multiple strands of narrative in a way that is intellectually interesting, but in the end doesn't make for a satisfying sense of story--and that is at least partly intentional.

Tabish Khair's novel begins with an unnamed narrator who describes finding a manuscript, written in Farsi, in his grandfather's library in Phansa, India. This narrative device creates some interesting issues for the novelist; the narrator goes on to describe his understanding of Victorian London, gleaned from the novels of Collins and Dickens. The Thing About Thugs uses the voice of this unnamed narrator, the manuscript of Amir Ali, and Notes on a Thug: Character and Circumstances, 1840, Ali's fictional history as dictated to Captain William T. Meadows. In telling his story (his "confession") of life as a "thugee," Amir Ali is assuming an alternate identity--lying, essentially--and telling Meadows what he wants (or needs) to hear. Unfortunately for Ali, his disguise as a "reformed" criminal is a little too convincing, and the imperialist listeners all too eager to believe that Ali is truly a thugee, and maybe not a reformed one. When  series of grisly murders occurs in London, suspicion falls on Ali.

The storyteller at the center of The Thing About Thugs tells one possible version of what happened to Ali.Khair undoubtedly had a larger purpose in the narrative choices he made, but for this reader at least, the resulting narrative distance meant that I wasn't very engaged in the story itself. There is also a kind of distance between the reader and the characters in the novel that left me feeling as though I didn't know the characters very well. And as I was reading, I found myself distracted by questions about the author's narrative choices; for instance, how does the narrative know about the thoughts of various characters in the novel if he is piecing together this story from manuscripts and documents? If the novel had a conventional omniscient narrator, then I wouldn't question why we suddenly drop into the point-of-view of Nelly, who is the cook in Captain Meadows house. And some sections of the novel are narrated from the point-of-view of an Irishman, whose style and diction are not distinguishable from that of the Indian narrrator.

The strengths of The Thing About Thugs are the intellectual ideas at the heart of the novel, and the period detail of Victorian London. Khair vividly describes London's opium dens and underground life peopled by immigrants from England's vast Empire. He is also adept at exposing British assumptions and prejudices, and the possibility of corruption and evil bred by privilege.

The Thing About Thugs explores engaging ideas about the nature of storytelling, identity and race--it's just that this novel didn't engage me at the level of story; although I kept reading, and not entirely without interest. The Thing About Thugs has been nominated for The Man Asian Literary Prize and is doubtless a worthy contender. I would recommend this novel for readers who really like meta-fictional narratives, and for those intrigued by questions of identity and the privilege of whiteness.

Posted by bibliophiliac at 2:52 PM

It will go on my TBR list because of the Victorian London theme if nothing else. Thanks for pointing me towards it.

@Scriptor Senex-I will be eager to hear what you think....

I'm the editor for the Books section on Before It's News,‭ ‬and I came across your website.

We'd love to republish your RSS feed on our site,‭ ‬with a description of your blog and link back to your website. You'd benefit from having some of our millions of readers see your posts and go through to your blog.

Shame you didn't like this novel. It sounds intriguing and the cover is exquisite. I'll probably give it a go for those reasons alone.

@Ryan-I'm glad you are going to give this novel a try! I think it is a good sign when the review still intrigues readers enough that they want to try a book, even when it is clear that the book didn't really work for me....I'll be interested to hear your opinion.

This novel just confused me.

@Sam-it was really a problem for me!