Review: The Flight of Gemma Hardy 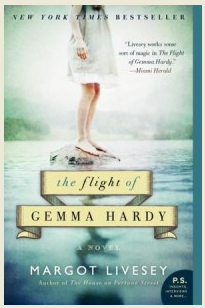 There are many pleasures for the reader in The Flight of Gemma Hardy, and most of all it is the kind of book a reader steadily devours in a couple of days, not wanting to put it down. In her most recent novel, Margot Livesey is "writing back" to Charlotte Bronte's Jane Eyre, a novel many readers revere. This presents some dangers for the author--some readers don't like having their beloved classics tampered with. Jane Eyre already has a history of writerly response in Wide Sargasso Sea by Jean Rhys. As something of a Bronte fanatic, I had high hopes and some trepidations about this book.  Jane Eyre was one of the first "adult" books I read, and I've reread it many times;I have read several biographies of Charlotte Bronte, and am well-versed in the Bronte hagiography. Would Gemma Hardy be a pallid imitation of one of my favorite classics?

What carried this novel, for me, was the voice of its main character. Gemma Hardy springs off the page: a small, plain, and very determined girl. When the novel opens it is the late 1950s, and Gemma's beloved uncle, her only protector, has died. Gemma's aunt, every bit as wretched as Jane's Aunt Reed, is about to send her to be a "working girl" at a Dickensian boarding school. Anyone who has read Jane Eyre knows jusr how grim that will be.

The Flight of Gemma Hardy is not a precise copy of the original; instead it is a faithful reimagining. Some memorable scenes from Jane Eyre are replicated in a satisfying way: Jane curled in the window seat with the bird encyclopedia, Jane's fainting in the red room, the death of her friend at the boarding school. At other times Livesey follows her original more loosely. But I think fixating on the parallels between the two novels is a bit beside the point. Gemma Hardy has a life of her own, and most of all The Flight of Gemma Hardy is the story of a girl on a journey toward herself. Gemma's journey leads her back to Iceland, where her Scottish mother and Icelandic father lived, and where Gemma herself once lived. Some of my favorite scenes in the novel take place as Gemma explores Iceland and meets her long lost relatives.

As in Jane Eyre, there is a hint of the supernatural in The Flight of Gemma Hardy. Livesey blends the mundane and the supernatural seamlessly, and for me that was one of the pleasures of the book. Livesey's Mr. Sinclair is perhaps less brooding and compelling than Bronte's Mr. Rochester, but I found Gemma's romance with her employer (not as a governess, but as an au pair) sweet and touching. In this version, the real and urgent calling is not romance or union with another, but a search for wholeness of self. While Gemma as reincarnation of Jane drew me into this novel, it is Gemma's flight toward herself and her past that kept me reading to the end.

For other opinions: TLC Book Tours reviews of The Flight of Gemma Hardy.

Posted by bibliophiliac at 5:32 PM

I'm rather intimidated by Jane Eyre. I think I should read this book and then maybe try to tackle it.

I'm definitely interested to see how this book compares to JANE EYRE since it is one of my all time favorite novels. Sounds like it will be a great read!

I read it in January when it first was published and simply loved it! In fact, it has been one of my two or three top favorite reads this year.

@bermudaonion-Read Gemma Hardy, then Jane Eyre! What a good idea. I'd like to hear how that goes....
@Laura Kay-thanks!
@Heather-If you love Jane Eyre, then Gemma Hardy will probably be a new favorite...
@Judith-I agree, this was one of my favorite books of the year, too.

Ah, I'm glad to know another Jane Eyre fan liked this one as much as I did. I thoroughly enjoyed comparing and contrasting this one and seeing "Jane" through modern eyes.

I am roughly half way through The Flight of Gemma Hardy and am undecided on whether I like it or not. I love Jane Eyre and this novel just seems to be a modern retelling of the same story. I hope, as you have indicated, that it is more. I hope it is much more.