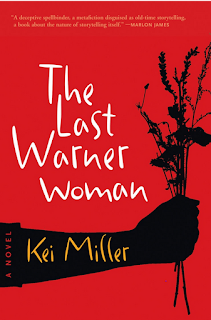 Jamaican-born writer Kei Miller begins his story in a leper colony, a "once upon a time" narrative told by a "Writer Man" narrator. The other voice in the novel is the powerful voice of the Warner Woman: Adamine Bustamante, born in a leper colony, reborn as a Warner Woman--a woman who literally warns of earthquake, accident, and Satan. The novel is told through the two narrative voices:  Adamine, in her down-to-earth vernacular, and The Writer Man, who artfully weaves together story (or as Adamine puts it, lies).

Adamine's voice is like the wind itself: irresistible, a force of nature. Miller conveys the feel of Jamaican patois without rendering Adamine's voice incomprehensible. The writer uses rhythm and a few choice words to give the reader the illusion of everyday speech, but a speech that is elevated and beautiful.

The Last Warner Woman is what happens when a woman tells the truth about her life. Adamine begins her life in a leper colony; her mother, the Original Pearline Portius, dies in childbirth. Adamine is raised by Agatha Lazarus, who lives to be one hundred and five. After Agatha's death, Adamine is called to a Christian Revival church, where she has a holy and profrane relationship with Captain Lucas, a holy man whose day job is as a yard man. She migrates to England, marries, and is ultimately locked in a mental hospital when her warnings are taken for delusions.

There is much pain in Adamine's life, but the pain is woven into something magnificent and wholly unexpected, like the purple doily the Original Pearline knits at the beginning of the story. To explain any more is impossible and beside the point--the reader just has to enter into the story and be dazzled. Adamine and The Writer Man are connected, and the whole of this book is knitted together with brilliant colors and themes that go to the very core of life. As I reached the last pages of the book, I realized that I was crying--and not just a few delicate tears--really crying. When I finished The Last Warner Woman I did what I often do when I'm really moved by a book: I went back and began reading again from the first pages. It was then that I realized the real genius of what Miller has done in this novel. This is a book I will read again and again--because there is that much there, and because I long to understand the craft of this novel.

I highly recommend this novel to readers who like a blend of the magical and the real. If you admire the novels of Toni Morrison or Gloria Naylor, you will love The Last Warner Woman. This is my favorite book this year, and I'm looking forward to Kei Miller's next publication--whatever it is, I'll be reading it.

Coffee House is offering a 30% discount for any of my readers who would like to purchase The Last Warner Woman from their web site. Go to http://www.coffeehousepress.org/ and use the code BIBLIOPHILIAC30.

Posted by bibliophiliac at 6:28 PM

Wow, your favorite of the year is high praise! I'll have to look into this book.

I love Toni Morrison and if this is your favorite of the year, those are two big selling points for me!