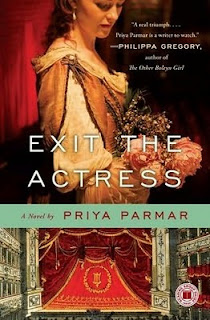 Exit the Actress: A Novel
by Priya Parmar
A Touchstone Book
Simon and Schuster
444 pages
$16.00
A copy of this book was provided by the publisher

Exit the Actress has an enchanting character at its center, and it is the voice of Ellen "Nell" Gwyn that dazzles the reader from the very first page of Priya Parmar's  novel.  Nell Gwyn could have spent her life in poverty, selling oysters, then oranges.  She seemed almost fated to follow her sister Rose into prostitution.  Instead she became an actress, a brilliant comic star, and the mistress of King Charles II.

Parmar recreates the world of Restoration London through Nell's diaries, through letters, playbills, gossip columns, and pages from the "Lady's Household Companion." But most of all, Parmar recreates Nell, giving her character a voice that is lively, engaging, and consistently genuine.  From the earliest scenes of the book when Ellen is selling oysters, then oranges at the Theatre Royal, Covent Garden, to Ellen's transformation into Nell, the spritely dancer and comic actress who charms all of London: it all rings true mainly through Ellen's own conversational voice.

The world of the theater offers Nell a home and a family, and that world is entrancing. Nell is enclosed in a close, if sometimes quarrelsome, community that offers her a security she doesn't find at home.  For Nell the stage is home, and the stage is the central metaphor of this beautifully constructed novel.  Nell walks on stage at the beginning of the novel, and the reader follows her closely until it is time for Nell to step off the stage:  the rest of her life is told in the Epilogue.  Exit the Actress focuses on Nell's years on the stage, and on her relationship with Charles II, who lives his life on the stage of the court.

Historical novels often offer a thrilling glimpse of a world of royalty and romance.  Exit the Actress offers a fully imagined world, with compelling characters who happen to live in a time and place very unlike our own. Priya Parmar has taken a genre that can be predictable and created a fully imagined universe the reader is reluctant to leave, and a fetching character who will resonate long after the reader turns the last page.


Posted by bibliophiliac at 8:15 PM

Labels: Review of Exit the Actress

This is such a wonderful review - I've got Exit the Actress on my stack of books to be read in two weeks, so I am really, really looking forward to it! :)

Great review--I'm looking forward to reading this for myself!

This looks like a great book. I will keep an eye out for it.

I loved this book from the moment I set my eye on it. I squealed when I got it in my mailbox and wolfed it down.

I raved about it for days on end and thoroughly enjoyed the unique approach & style to recreate London of days gone by.

Bravo Priya and once again you put me to shame when I read your reviews. Have a lot to learn and hope to get to your level one day.

@AisleB-Can't wait to see what Priya does next. I really loved Exit the Actress, and just fell in love with the character of Nell.

lisa! i am so pleased you reviewed nell!

This is an excellent review! I finished reading and reviewed Exit the Actress today. I totally agree about being reluctant to leave the fabulous setting of this book... I really think I'm going to miss it!