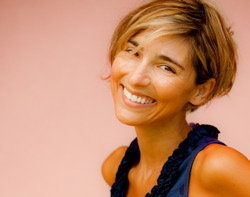 Priya Parmar is the author of the novel Exit the Actress, published February 1st.  This is Priya's first novel, and she is currently researching and writing her second novel, which is set in London before and during World War I.

Exit the Actress tells the story of Ellen "Nell" Gwynn, who rose from orange seller to principal actress in 17th-century London, and who went on to become the celebrated Mistress of Charles II.  Priya was gracious enough to answer a few questions about her novel.

Bibliophiliac:  You have worked as a dramaturg.  Can you tell readers what a dramaturg does?
Priya Parmar:  I think a dramaturg has different roles on every show.  I worked with Eve Ensler, author of The Vagina Monologues, for a long time and was the dramaturg for The Good Body in particular.  I wrote with Eve, was in rehearsals and workshops, and kept track of the script.  Every night I would sit up in the tech box and literally record the show--what lines worked, what didn't work, and then work with Eve and the director deciding which lines stayed in, where new lines were needed, what should be cut. Then Eve and I would edit it. It was a fluid script as we were workshopping it so it was always changing. It was a wonderful crash course in writing!
B: I loved the way Exit the Actress recreated the world of the theater and the stage.  This seemed to fit into a larger metaphor of the world as stage.  Can you comment on how the stage brought your characters together? Being on stage seemed to help Nell understand how Charles II was constantly "on stage."
PP: I am so pleased you saw that!  Nell understood immediately that Charles was essentially two men:  the king who was a public property and always on show, and the man underneath who was shaping and presenting the king.  Nell understood this as she was two people as well:  Ellen, her real self, and Nell, a famous actress.  She detected the duality and had enormous sympathy with the relentlessness of the role of a king. She fell for the guy underneath, and he fell for the woman behind the celebrity and I think this was the core of their affection.
B: Nell's voice is so clear and so genuine.  How did you arrive at this character's voice?  Did you ever consider writing the novel from another narrative point of view?
PP: Oddly, given the specific format of the book, no.  The structure and Nell's voice arrived fully formed and tenacious.  She was not interested in being anyone else, even though she was a much different Nell to the famous courtesan we normally see depicted in fiction.  And she wanted to tell her story this way.
B:  Were social stations as fluid in 17th c. London as they seemed in the novel?  Or was Nell exceptional in her ability to move from one station to another?
PP:  Nell was really exceptional.  She was entirely apolitical and her friendships were based upon affection and loyalty--period.  She was apparently uninterested in cultivating friends for the sake of social advancement and parties at her house were famous for being a raucous mix of people who would not ordinarily socialize anywhere else.
B:  I loved the character of Rose, and the relationship between Rose and Nell.  Rose's life seemed to be something of a foil for Nell's.  How common was it for girls like Rose and Nell to be forced to resort to prostitution?
PP: Unfortunately, very common.  I like Rose too.  In the original manuscript I had the actual letter from King Charles releasing her from prison in its entirety.  Rose's life must have affected Nell's choices enormously.
B: I really enjoyed the elaborate descriptions of Nell's gowns. Color seemed very important in Exit the Actress. There was a profusion of colors in descriptions of gowns, flowers, and room decorations.
PP:  It was a thrilling time in England aesthetically.  King Charles had been in exile for over a decade, and brought back ideas about clothes and furniture and architecture from the Continent.  I wanted to convey how vibrant life was at this period.  They were having fun with fashion and decor and the look of things.

The fresh, emboldened ideas spread to morality as well, as Charles had one of the most licentious courts in Europe, but it also led him to invite women onto the stage for the first time.  All this change stemmed directly from the king, and Nell stepped right into the heart of it.
B:  Was there anything special, fiction or non-fiction, that you read before beginning Exit the Actress to help create the mood or emotion of your novel?
PP:  In terms of primary documents I read the correspondence in extant between Charles and Minette, and it told me so much about them and their family dynamics.  I read Nell's will.  It is an extraordinary, generous document.  I also read the play Aphra Behn dedicated to her dear friend Ellen Guin (sic).  I realized that Nell was a woman who had an extraordinary ability to inspire love in others.
B:  I have to admit that when I closed this novel, I began to miss the character of Nell immediately.  Would you ever write about the characters or the time period in a future novel?
PP:  I miss them too!  I would love to return to the Restoration and Nell and Charles.  I am definitely tempted to revisit them!
B: Will your n ext novel be set in the world of the theater?
PP:  It is not, but the theater still pops up all over the second novel.  It is set in London just before and during the First World War and London is such a wonderful theater city.
B: Is there anything that I've forgotten to ask that you'd like to talk about?
PP:  No, your questions were wonderful!
Posted by bibliophiliac at 8:26 PM

Looking forward to reading this book.

Where I live Nell and Charles II are part of our history.

I linked this post in my Friday Five this week!

Great interview, I loved that the questions had a lot to do about the book. It definitely sparked my interest in the book!

let me try this again...

hence the deletion of the first comment.
Here is what I tried to post the first time round.. I blame it on my star struck status and fat fingers on the keyboard.

"Ahhhh my 2 fave women in the world of reading... I call it the meeting of art and creativity all in one place.

Pinch me I feel star struck with both of you here. :)"

@AisleB-aw shucks! I'm so glad you told me that was you. When people delete comments I think really paranoid thoughts!

didn't lisa ask such wonderful, insightful questions! aisle b, you are so sweet!!!!

Stopping by from the blog hop and to tell you about a book giveaway.

Giveaway for GREAT HOUSE by Nicole Krauss will begin on my blog on February 19th until February 23.

I won't be the only blog giving away books.

Stop back on Saturday for the full post and giveaway form.

I just finished reading your review and jumped to the interview post right away. They are both awesome, of course.

I have been waiting for so long for your review, and sure enough, it happened while I was gone. Sigh!