The Story on Thursdays: Raymond Carver 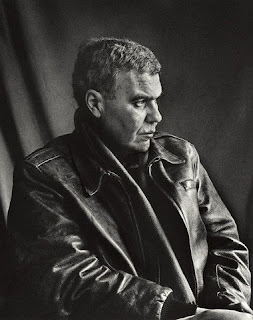 If we're lucky, writer and reader alike, we'll finish the last line or two of a short story and then just sit for a minute, quietly.  Ideally, we'll ponder what we've just written or read; maybe our hearts or our intellects will have been moved off the peg just a little from where they were before.  Our body temperature will have gone up, or down, by a degree.  Then, breathing evenly and steadily once more, we'll collect ourselves, writers and readers alike, get up, "created of warm blood and nerves" as a Chekhov character puts it, and go on to the next thing:  Life.  Always life.

Raymond Carver, Author's Note to Where I'm Calling From


Raymond Carver came from obscurity, poverty, alcoholism, and "crap jobs" to become a major literary force in American letters.  He had two lives:  the first, hard, bitter, filled with struggle, and the second, the icing on the cake--with literary success, recovery from the alcoholism that threatened his life, and at long last, love.  Carver's relationship with poet Tess Gallagher was both romantic and literary: they were each others' first readers.

The Library of America Raymond Carver:  Collected Stories offers a fascinating overview of a gifted writer who crafted stories some critics called "minimalist" (Carver himself rejected the term).  Perhaps "precisionist" is a better term; the stark stories are stripped down tales of the down-and-out, the broke, the blue-collar workers.  Carver began to achieve critical success in the late seventies and throughout the eighties.  His first collection, Will You Please Be Quiet, Please? was edited by Carver's close friend and mentor, Gordon Lish, with whom Carver finally had a falling out.  The history of the relationship between Lish and Carver is a complex one; Carver was grateful to Lish for his friendship and assistance (Gordon placed Carver's first stories for publication, and was instrumental in his success).  Yet finally Carver chafed at what he considered to be Lish's excessive editing, and became uncomfortable with his mentor's interference in his writing.  Lish, meanwhile, was publicly taking credit for Carver's stories, implying that he had virtually co-written them.  Carver's widow, Tess Gallagher, has been working to protect Carver's legacy.  The Library of America edition offers readers the opportunity to see the original, unedited versions of the stories from the collection What We Talk About When We Talk About Love.

Also included in this collection is the darkly luminous story "The Errand," a departure for Carver in subject and style:  the story is about the last weeks of Anton Chekhov's life, and was composed while Carver was suffering from terminal cancer.   For admirers of Carver, or for those interested in contemporary short fiction, Collected Stories is a volume to browse in, read, and reread.  Carver's essays are spare meditations, mostly on writing and life, and the places where the two intersect. Here Carver describes his own discontinuous writing life:


Sometimes a year or two would pass when I couldn't even think about writing stories....Mysteriously, or so it would seem to me, there would come a time to turn to fiction again.  The circumstances in my life would be right or at least improved and the ferocious desire to write would take hold of me, and I would begin.

This underlying ferocity gives Carver's stories their power, despite the surface coolness.  There is always an urgency, a commitment to limn the lives of his hardscrabble characters.  Carver knows his characters because his life was like their lives.  There is a sense that stories--reading them and writing them--may have just saved Raymond Carver's life.

I love the swift leap of a good story, the excitement that often commences in the first sentence, the sense of beauty and mystery found in the best of them; and the fact--so crucially important to me back at the beginning and even now still a consideration--that the story can be written and read in one sitting.

For anyone who writes short fiction, or for the serious reader of short fiction, Raymond Carver:  Collected Stories is essential.  If you have not read Carver before, I recommend you begin with this beautiful one volume edition; if you are already a Carver fan, I recommend that you add this volume to your library.
Posted by bibliophiliac at 7:22 PM

I just bought this very edition at Borders two days ago, when they sent me a 50% off coupon. Such a deal for 20.00; I would have spent the full 40! Ever since reading that he is one of Haruki Murakami's favorite American authors, along with John Irving, I've been longing to read Raymond Carver. Even his face is interesting! I'm saving this for a calm moment in my life to read, which means it might have to wait until January. Then I can discuss it with you more lucidly.

Wow, I really love the quotation from the author's note at the start of your post. I am familiar with the feeling he describes, and he put's it just right.

Carver's may have to be my next book of 'short stories' after I finish with my William Trevor and Joyce Carol Oates collections.