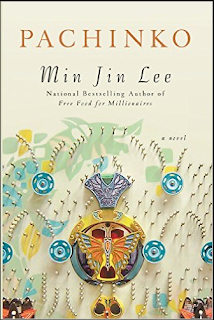 Pachinko
Min Jin Lee
Grand Central Publishing
hardcover, 490 pages
A review copy of this book was provided by the publisher

I read voraciously, and mostly I read what I like. If I don't like a book, I put it down. I've gotten pretty good at choosing books that I know will appeal to me. So good reading experiences are my norm. But every once in a while I pick up a book and am completely gobsmacked. I fall in love with the world of the book, with its characters, and I don't want to leave that world. At the end of such a book, I feel a real physical sensation in the vicinity of my heart, a sensation that stays with me and makes picking up any other book impossible. I'm in a relationship with a book, and I can't move on.

That's how I feel about Min Jin Lee's newest novel, Pachinko. My love for this book is real; this book is everything.

If I tell you that George Eliot's Middlemarch is my favorite novel, that I have read it again and again and again, you might get a sense of the personal reading schema that leads me to love Pachinko.

Pachinko is an ambitious, panoramic novel that tells a big story about ordinary people from an omniscient point of view. The novel encompasses history, geography, and culture through meticulously created characters who live and breathe on the page.

The first sentence of the novel is this: "History has failed us, but no matter." Then begins a tale that almost reads like a fable. The reader is taken to Busan, Korea, in 1910 when Japan annexed Korea. We are introduced to characters living on the very edge of poverty, almost starvation, coming up against the brutality of history. The family that produces Hoonie, who marries Yangjin, leads to the birth of Sunja--an adored only daughter. It is Sunja and her problematic out-of-wedlock pregnancy who launches the narrative, and Sunja remains at the center of the novel. By the end of Pachinko I was thoroughly in love with this illiterate, innocent, persevering woman.

Min Jin Lee has said that the genesis of this novel was a story she heard in Japan, of a young Korean boy who, bullied mercilessly about his Korean origins, committed suicide by leaping from the top of a building. Due to legal and social discrimination against Koreans in Japan, Koreans, even ethnic Koreans born in Japan cannot be said to be at home in Japan. Even for those of Korean descent who are born in Japan, Japanese citizenship is not automatic; in fact it is very difficult for Koreans to gain Japanese citizenship. When Sunja emigrates to Japan during her pregnancy, she escapes the shame of having an out-of-wedlock child in her village. But she enters a world that cannot truly be home, and she spends the rest of her life in that world.

Sunja and her family encounter discrimination, poverty, and hardship. Min Jin Lee shows a Dickensian delight in creating a multiplicity of characters. Because of the scope of Pachinko, the inner lives and stories of even minor characters enliven the novel. These characters are caught within the arc of history, but they live their lives and experience joy and triumph as well as hardship and catastrophe.

The title of the novel comes from a kind of game (similar to pinball) which is played in gaming parlors in Japan. Because ethnic Koreans are shut out of many professions, Sunja's second son Mozasu goes to work in the somewhat shady world of the Pachinko parlors. Her older son, Noa, is studious, and ends up reading English novel after English novel. The two sons take very divergent paths, and each son has his own story. There is both deep love and enormous rivalry between the two, and intimate secrets that divide them.

I can't even begin to summarize the events of Pachinko, and it seems pointless to even try. The novel encompasses so much of history, including World War II and the Korean War, and yet the story stays both intimate and large. I loved the characters because they are real ordinary people facing struggles that are Biblical in scope: deception, secrets, rivalries, hidden love. The intimate struggles of the characters are played out against the backdrop of a history that is indifferent to their daily lives. I came to this novel with almost no knowledge at all of Korea or the history of Koreans in Japan. I feel grateful that the author dedicated herself to telling this story. Pachinko is a real achievement, and I cannot do justice to the complexity and beauty of the novel--the best that I can do is to urge readers to dive into this spectacular book.

Posted by bibliophiliac at 10:35 AM

Wow, I can tell how much you love this book! I need to read it!

@bermudaonion: Kathy I think you will love it! Such a splendid book.

Great review! I don't know much about Koreans history with Japan so this seems like a fascinating subject to explore in a novel. I do have a copy of this one and am definitely looking forward to it.

@Iliana-I think you will really love Pachinko. It's getting amazing reviews, and is showing on a lot of "best of" lists for 2017 already.

I've read - and loved - her short fiction. Been a little intimidated by this one, but your review has renewed my curiosity! Will take a look - especially with Korea being so in the news these days!