Review: By the Wayside 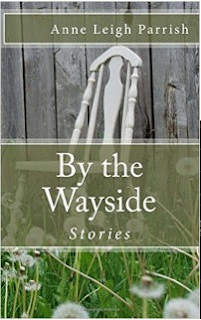 Two things stand out for me about Anne Leigh Parrish's writing: her ability to create quirky, compelling, and entirely believable characters, and her incredible eye for detail. The telling details enliven her stories, and emblazon her stories and their characters in my memory.

Parrish is the author of two previous story collections and a novel, and every piece of her writing that I have read has stayed with me. Sometimes I will read a novel and quite enjoy it, but later find myself unable to remember much of anything about it. With Anne Leigh Parrish's work, I find that those memorable details and compelling characters stick with me, almost like real people I have known.

In By the Wayside, Parrish brings together an eclectic collection of stories, including touches of magical realism, touches of actual magic (including a wish-granting genie), and historical fiction. In "Trial by Luck," the serious fractures in a couple's relationship are laid bare by an encounter with a genie. By turns realistic and unreal, the core of the story is the differences in the way Jonathon and Laurie see the world, and even the genie, in entirely different ways. This fast-moving story almost had a "Twilight Zone" feel to it, and I loved the surprise ending.
In "How She Was Found" a graduate student finds an ancient skeleton, and her own power in a male-centered world. In "Smoke" a young girl finally finds her rage, and an escape from a shameful secret. In "The Professor" a woman examines her past and finds the motivation to move forward in a different way.

I think my favorite story in this collection was "Where Love Lies." I'm still thinking about this story, and I'm still not sure I know how it ends. "The Keeper of the Truth" is another story that ends with a sentence that can be interpreted more than one way. The stories in this collection often seem to resonate long after you finish reading them, and often I would find myself closing the book when I finished a story, to give myself time to think before starting the next one.

The characters in Anne Leigh Parrish's stories are often damaged people, people who have lost love or never had it; parents who are neglectful, children who are smarter or more knowing than their parents, husbands and wives who deceive. But each of the characters is written in such a humane and compassionate way that the reader suspends judgment and instead looks for understanding. These are mostly ordinary people doing mostly ordinary things--and then sometimes throwing it all by the wayside.

I highly recommend By the Wayside. In fact, I would recommend Anne Leigh Parrish's entire body of work; she's writing finely detailed and memorable fiction, and she's an author you need to know.

Also by Anne Leigh Parrish:  All the Roads That Lead From Home (stories); Our Love Could Light the World (stories); and What Is Found, What Is Lost, a novel.

Posted by bibliophiliac at 9:36 AM