Review: I'll Take You There 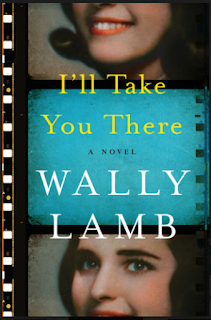 I've been an ardent fan of Wally Lamb since his first novel, She's Come Undone. Lamb's writing is a touchstone for me: I love his complex, layered plots, the slow unfolding of the character's lives and histories, the dense psychological complexity of his stories. My two favorite Lamb novels are I Know This Much is True and The Hour I First Believed. Each of those books plumbs the depths of trauma and ends with a sense of redemption. In that sense I'll Take You There is a "typical" Wally Lamb novel.

Despite that similarity, this latest Wally Lamb novel surprised me. First of all, there is a supernatural angle: the protagonist, Felix Funicello, is a film scholar who runs a movie club in an old vaudeville theater, and it is in this theater that Felix encounters the ghost of a pioneering feminist director, Lois Weber. This plot device was slightly jarring for me at first, but as I read on I became more comfortable with Lois and the other ghosts who popped in and out of the novel. Felix takes a trip into his own past over the course of several weeks, courtesy of Lois, who shows Felix ghostly "movies" of his own childhood....movies that he can enter and exit at will.

Much of the plot revolves around Felix's childhood memories, which are often painful, especially when it comes to his relationship with his sister, Frances. Felix's family members are keeping a secret, and in Wally Lamb novels (and often in life) secrets usually come out, eventually.

Although there is a male protagonist (and narrator), I'll Take You There focuses in on women: their history, their obstacles, and the many ways in which women have had to bear a heavy burden for their gender. Felix's sisters, his mother, his feminist ex-wife Kat, and his new feminist daughter Aliza all have prominent roles in the narrative.

The film metaphor worked on some levels, and I kept waiting for some kind of surprise ending or epiphany or metaphor that would make the idea of Felix watching films of his childhood click into place for me. But it turned out to be a device that fit into the character's life and evoked a sense of nostalgia....but no weird revelation like I expected. My favorite scenes in the book were the childhood scenes from the "movies" of Felix's life, and the very last page, where the book came together for me in a very satisfying way.

I didn't realize until I finished I'll Take You There that a previous novel features Felix and his family (Wishin' and Hopin'). Since I enjoyed the book without reading the previous book, I don't see why other readers won't. I found this novel to be lighter in mood and texture than Lamb's other books (although there is definitely darkness here too). Readers who enjoyed Wishin' and Hopin' will probably also like I'll Take You There; devoted Lamb fans will find much to love in this newest novel.

Posted by bibliophiliac at 6:46 PM

I loved Wishin' and Hopin' and hope to read this soon.

Thank you for reminding me that I would love to read Wally Lamb. I think, knowing my husband's interests, that Ken would enjoy him, too. Maybe we'll do a "joint read" of one of his books very soon. Must order copies.
Do you have a list of books to read during your holidays? I do hope so. I suggest you pretend you have a bad cold and retire to your bed--not for the most festive days, perhaps, but for the others.
Happy Reading!
Judith

@bermudaonion- I think you will really love I'll Take You There. Hope you get to read it soon Kathy!

@Judith- I am so looking forward to going on a reading binge as soon as school is out for Winter break. We have weather days to make up because of Hurricane Matthew, so I'm not finished until the 23rd. If you decide to read a Wally Lamb book, I Know This Much is True is long, but oh so good.

Oh my gosh--how I recall the horrid Decembers--both in teaching college and in middle school--when we had to push on until the 23rd. I'm so with you in spirit. You need an even bigger pile of books, and a larger stock of tea, hot chocolate, or special coffee to retire with. Emphasis on the word "retire."

For extra comfort, wash all your sheets and comforters and blankets now.

I wish you comfort and great reading!
Judith
Of course, I'll be dying to know what you read!

I didn't realize this was a continuation of a story from a previous book! It is nice to know that this particular book can stand on it's own for those who haven't read the other one.

Looking forward to this one. I love Wally Lamb and hadn't realized Felix from his previous book was a character in this one as well. Thanks for sharing.