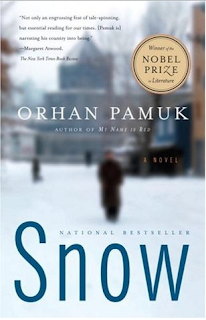 I'm reading Orhan Pamuk's Snow, and it's incredibly dense, like one of those "death by chocolate" desserts. I've read one other book by Pamuk, My Name is Red, and I remember that it seemed to take forever for me to finish, though I loved the book. Pamuk's writing is both poetic and satirical, and the writer he most reminds me of is Franz Kafka, for some reason.

I've reached the halfway point in Snow, which is set in the provincial Turkish city of Kars. Ka, a poet who has spent a dozen years in exile in Germany, visits his homeland on the occasion of his mother's death and funeral in Istanbul. But Ka's family is barely mentioned; instead, the narrative focuses on Ka's attempts to document both an election in Kars, and a rash of suicides by young women--the "head scarf girls."

Ka has also come to Kars to pursue a romantic relationship with Ipek, a beautiful friend from his youth who has separated from her husband.

While in Kars, Ka, who has been blocked, suddenly experiences an outflow of poetic inspiration. This happens in the midst of religious and political chaos, leading to an actual revolution and violence. Meanwhile, it snows, and snows, and snows.

What seems at first to be a simple narrative becomes a layered critique of religious excess, political excess, philosophical excess. And it all reaches a kind of hysterical dramatic excess when a stage performance culminates in violence.

I'm so immersed in Snow that I haven't really processed everything that is happening in this densely beautiful book. This is the kind of reading I don't have time for when I'm teaching--I just don't have the mental space to keep the narrative thread going in a book like Snow. Not that I wouldn't try! But I love that I have the luxury of reading slowly and thinking deeply right now.

My summer reading list is constantly growing and morphing. The most random comment read on twitter will send me off on a tangent, but I am trying to focus on longer books, classic books, and book that require attention.

When I finish Snow I might pick up Samantha Hunt's Mr. Splitfoot, which sounds incredible.

I really need to get my blog-reading groove back! Give me some recommendations of awesome book blogs, because school ate my life this year and I'm completely out of the loop now. And tell me about great books you've read slowly and savored.
Posted by bibliophiliac at 9:13 AM

I admire you for reading such a dense, rich book. Thank you for sharing i.

Loved your post on Snow. I've put it on my read next list and even gave you credit of at my blog :)
As always a great post on what sounds like a challenging and amazing book!

@Deb Nance-dense, rich books are definitely what I am craving right now!

@Laura-I've been meaning to read Snow for the longest time. I'm glad I finally found the time to immerse myself!

Seems that you're drawn to the exact opposite of what are typically thought to be summer books, those light, fluffy beach reads. But it really is the perfect time to sink into a big book!

@Lisa-I'm such a contrarian! But light, fluffy books don't have that much appeal for me!