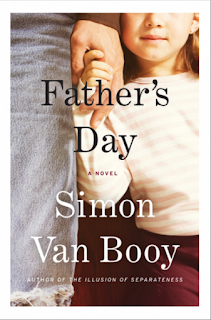 Father's Day, Simon Booy's newest novel, tells a deceptively quiet story of the love between a father and daughter. The reader will want to go back to the beginning of the book, and reread the first few chapters (I did) to fully appreciate the simple yet profound beauty of this book.

Van Booy is an artist of the swift glance into a human heart. His style is unadorned yet lyrical, and the writer's focus on his subject is almost hypnotically intense. In Father's Day, Harvey, a young girl (my Spidey sense tells me this character name comes from the Jimmy Stewart movie about a six-foot-tall invisible rabbit) lives with her loving parents, and a doll named Duncan. She doesn't know it, but she is creating memories out of simple experiences like dropping a mug of hot chocolate in the snow, or pressing her hand into the earth while gardening with her mother.

When Harvey is six, her parents die in a car crash. A social worker, Wanda, brings Harvey and her uncle, Jason, together; Harvey and Jason have never met. Harvey has heard of Jason through her father, but the two brothers were estranged. Despite Jason's past as a convicted felon, his physical disability (he has a prosthetic leg), and a long list of traits that make him an unlikely father figure, Wanda gently urges the orphan and the felon to adopt one another--which they do.

The narrative shifts back and forth between past and present (or I should say pasts, because both Harvey and Jason have more than one past). The present-day Harvey, an artist/illustrator living in Paris, plans a special visit for Jason, whose trip coincides with Father's Day. She gives Jason a series of gifts, each of which evokes a particular memory, all of which lead to the revelation of a long-held secret.

The flashbacks into the past show Jason's struggle to become a person who doesn't explode in anger, who knows about things like dentist visits and Polly Pockets--not the angry, lonely man who once got into bar fights and worse.

Van Booy casts his characters in a cool but compassionate light. Jason is never a perfect father; at times he he much less than perfect. But together he and Harvey create a life, and he succeeds in his ultimate aim--to teach Harvey to be a good person.

Father's Day is a book about darkness, terrible mistakes, and the ultimate redemption, the saving grace of love. It's a beautiful book that surprises the reader in the end, in ways that are best left unexplained.

In one scene near the end of the book, Harvey and Jason visit the Louvre. This painting by Sir Henry Raeburn is mentioned: 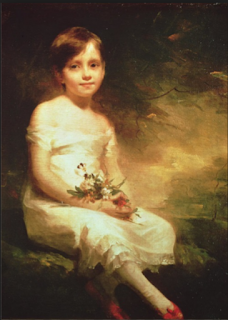 I love the open, direct expression on the little girl's face. It is a simple, beautiful painting. Father's Day is beautiful in just the same way.

Readers of Simon Van Booy's other novels and stories ( Tales of Accidental Genius, The Illusion of Separateness, Love Begins in Winter, and others) will naturally want to read Father's Day. Readers who love stories about humans will want to read this and other works by the author. Highly recommended.

Posted by bibliophiliac at 4:53 PM

I've heard his writing is wonderful. I want to check this book out.

I think I would enjoy this book.

I really need to make time to read Van Booy - I am clearly missing out on some gorgeous books!