Review: Let Me Die in His Footsteps 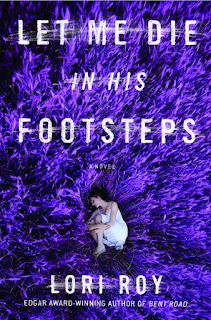 Let Me Die in His Footsteps
Lori Roy
hardcover, 336 pages
Dutton
A review copy of this book was provided through TLC Book Tours

Let Me Die in His Footsteps captured me from the first pages. Set in rural Kentucky, Lori Roy's novel drew me in with captivating characters, an unsolved mystery, and an intense sense of place. The story begins in 1952, with Annie Holleran on the cusp of womanhood. Annie has the "know-how," the ability to intuit what others don't see or know. She also has a family filled with secrets and conflict; her Aunt Juna, who left Kentucky shortly after Annie was born, was known for having the "know-how" too. Juna also was at the center of a spectacular crime that led to a public hanging, and the death of her younger brother. Annie "favors" her Aunt Juna, with her blonde hair and black eyes; some people think (and Annie fears) that Annie resembles Juna in other ways as well.

Lori Roy has created a narrative that is complex and layered. The story shifts back and forth between 1952, with Annie seeking a glimpse of her future husband in a neighbor's well at midnight, and discovering a body instead, and 1936, the year that Dale Crowley disappeared, and Joseph Carl Baine was hanged. It takes almost the whole novel for Roy to lead the reader to an understanding of how all the threads of this story come together, and when the reader finally gets there, the effect is stunning.

I loved the atmospheric setting of Let Me Die in His Footsteps. Roy expertly develops a sense of a clannish community with deeply rooted customs, and equally deeply rooted mistrust of what is only dimly understood. The families in this kind of community have lived side by side for generation upon generation, and their stories are known by all. The Hollerans and the Baines are neighbors, But ever since Joseph Carl was hanged on the basis of Juna's accusations, the Hollerans have steered clear of the Baines.

The complications in Let Me Die in His Footsteps go back a generation, to the sisters Sarah and Juna. Juna is an uncanny young woman, feared by everyone, even her father and sister. She seems to be an Eve or Lilith figure in this novel, leading many into temptation. Juna's sister Sarah is in love with their neighbor Ellis Baine, but he seems not to know or care that Sarah exists. On a fateful day, Sarah manipulates events so that she can encounter Ellis; to do this, she sends her sister Juna out into the fields with their little brother Dale. Dale never returns.

The relationships and plot twists in Let Me Die in His Footsteps are complex, complicated, and not easily summarized. That's part of the draw with this novel: the author takes the time to delineate family relationships and generational conflicts. In the end, the novel takes several surprising turns, ending with a few surprises I never would have predicted.

The novel has a timeless feeling; although the specific religious beliefs of the community aren't stated, it's clear the life of these people revolves around church and family, and their beliefs are conservative and superstitious. One of the unexplained customs of the folk in this book is that young girls who reach their "Ascension Day" (the date halfway between their fifteenth and sixteenth birthday) go to look into a well at midnight on that date, looking for a vision of their future husband. The girls then name the subject of their vision, which usually leads to courtship. It seems like and unusual bit of female agency in a male-dominated culture. Another unusual touch in the book is that the Holleran family (which Sarah marries into, and Annie is born into) grows lavender, rather than the tobacco that everyone else in the area farms.

The novel Let Me Die in His Footsteps reminds me of most is one of my favorite books: East of Eden  by John Steinbeck. The reason I make this connection is the generational conflict in the story, as well as the Biblical overtones. And the character of Juna reminds me quite a bit of Steinbeck's Cathy.

Lori Roy succeeds in creating an enthralling story that combines romance, mystery, conflict, and violence in a way that is both timeless and entirely realistic. This is a novel I will be thinking about for some time to come.

Posted by bibliophiliac at 5:15 PM

Really glad to hear you enjoyed this one. I have this book sitting on my stacks and am looking forward to it!

East of Eden is one of my very favorite books - that you can compare the two is pretty amazing and has me putting this at the top of my TBR list!

@Iliana-I'll be very interested to hear what you think about this book. Can't wait to hear!

@Heather-It really didn't strike me until I finished the book, but I found a lot of similarities between this book and Steinbeck's classic. I'd love to know whether the author has read East of Eden, and whether those similarities are intentional.