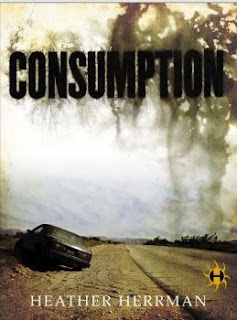 This was just one of those books that didn't work for me. Before I go into why I didn't enjoy Consumption, I'd like to talk about what the author, Heather Herrman did well, and why you might like this book more than I did.

But first, a little bit about the plot: John and Erma are a married couple who are a bit down on their luck. John, an English professor, lost his job first. Then Erma lost her job as an advocate for abused women. So they are moving across the country, heading for Maine (a nod to Stephen King?), where John is going to work for Erma's relative. The couple are traveling with an old Honda and a moving van, accompanied by their dog, Maxie.

Maxie is by far my favorite character in this book.

Not that the human characters aren't well-written, because they are. But Maxie is a really well-drawn, individual dog, and she's integral to the plot.

So John and Erma are having a tough time in their marriage and their lives, and it's about to get tougher because Erma's car dies along the highway in Montana. And as luck would have it, they break down right outside a town right out of a horror movie. At least, in terms of plot, this scenario reminded me of a horror movie, where you get that bad feeling early and often.

Cavus, Montana, is a town built on evil, an evil that can't be entirely eradicated. According to the Native American tribe that tried to drive settlers away, no one should try to live in the area because of this ineradicable evil, which the author depicts as rising up from an abandoned mine.

But for a town built right on top of evil, Cavus seems deceptively calm and welcoming. Sheriff Riley stops and helps the young couple, putting them up at his Aunt Bunny's. And John and Erma are incredibly lucky, because they are just in time for the annual Festival Day......

Herrman establishes her main characters well, and puts them in an ominous situation. For a minute I thought the Festival was going to be some kind of Shirley Jackson, Lottery-esque event. Especially when the Festival was alluded to constantly by all the supernaturally cheerful small town characters. Instead the plot headed in a much more Stephen King-like direction. My problem with the book was two-fold: I didn't believe some of the plot details (mostly having to do with the Sheriff and his behavior), and there was just a little too much blood and gore for me (definitely a matter of taste). The gore just seems to be an element of the horror genre, and I'm not sure that horror fans would be put off at all.

Herrman's plot is carefully crafted, and she is after much more than a simple scare-fest. She obviously put a lot of thought into the ideas of her book, as well as the overall shape of her book. The form that evil takes in her novel doesn't just come out of nowhere--there are cultural and social underpinnings to the form evil takes in the novel. So even though Consumption was not my dish, it may very well be the perfect meal for horror fans.