Review: A Matter of Mercy 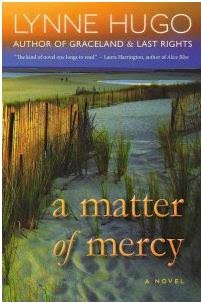 A Matter of Mercy
Lynne Hugo
Blank Slate Press
paperback, 263 pages
a review copy of this book was provided through TLC Book Tours

If I had to sum up A Matter of Mercy in just one word, I would say that this is a book about trust. The characters in this novel are all deeply flawed, yet entirely engaging--in other words, they are human. Caroline Marcum, known to friends and family as Cici, has returned home to the town of Wellfleet in Cape Cod because her mother, Eleanor, is dying.

Cici's return home brings her face to face with her unresolved past. She is still struggling with her sense of guilt for having killed a four-year-old child in a car accident. Arrested and charged with driving while intoxicated, Cici spent time in jail, lost her teaching certificate and career. Eventually she lost her marriage. She attempted to escape her past by moving to Chicago, where she supported herself as a waitress. Now, back home in Wellfleet, Cici is facing the loss of her mother; she is also facing her unresolved guilt, and the ways in which her life has been changed by the death of a child. As Cici realizes that the life she thought she was going to have is now gone forever, she is back in her childhood home, with plenty of time to think.

Cici's childhood home in Wellfleet is a Cape Cod cottage, right on the beach. While many local neighbors have had to sell their homes as taxes became exorbitant, and "washashores" have moved in with their ostentatious, glass and multi-deck houses, Cici has a view, from her picture window, of the traditional Cape Cod way of life. In Wellfleet, aquaculturists with "grants"--land between the ocean and the high tide mark, where oysters and quahogs are cultivated--work during low tides within view of the Marcum cottage. One of the aquaculturists, Ridley Neal, was a high school classmate of Cici's. Now Rid is working as a sea farmer, cultivating oysters and quahogs on the grant he inherited from his father.

Cici and Rid meet on the beach, where Rid tells her about his life as a sea farmer, and about his past, which includes a stint in prison for selling drugs. Later, when Cici glimpses Rid struggling to save his oysters from an incoming hurricane, she goes out on the beach and helps him. Since her mother is hospitalized for the night, Cici and Rid end up at her house. The brief romantic interlude that follows in large part determines the trajectory of A Matter of Mercy, as two damaged, flawed, and struggling characters try to learn to trust one another.

Caroline Marcum and Ridley Neal are not airbrushed romantic leads. They are ordinary people who have made huge mistakes in their lives. These two struggle to even have a conversation with each other--for much of the book it seems as though every encounter between the two ends with an emotional explosion. And Rid, who has a deep love and commitment for two just two things--his Labrador retriever and his work--is caught up in another struggle. He and two other aquaculturists are being sued by a washashore property owner, Pissario, whose land borders the tidal flats that include their grants.

A Matter of Mercy is a book that is totally rooted in a sense of place. The subplot of the aquaculturists' legal battle, and their struggle to maintain a traditional way of life, give Hugo's novel a larger context and significance. This is a novel about people who labor for a living, and most of the novel's action takes place during a time when the tourists and part-timers have gone. This gives Hugo the opportunity to paint a picture of the daily lives of ordinary people living in a place of extraordinary beauty. For Rid, working the flats is the only life he can desire or imagine. There's a hint of Thoreau's Transcendentalism in some of Rid's attitudes toward working outdoors, with the sky as his ceiling. Hugo captures both the arduous labor and the simple joys and pleasures of this way of life.

As Cici watches her mother slowly fade away, her primary relationship is with a hospice nurse, Elsie. Every encounter with Rid--after the one night they spend together--seems fraught with mistrust. Cici finds solace in Elsie's kindness and wisdom. Elsie advises Cici, not just in physically caring for her mother, but in letting go and healing emotionally as well. One of the pleasures of A Matter of Mercy is the detailed characterization of not just the main characters, but all the characters.

Since one of Cici's major unresolved issues is her guilt over the death of a four-year-old boy (a boy born with major deformities, which makes it even worse in Cici's eyes), it seems inevitable that one she returns to the area where the accident took place, she will ruminate constantly about it. She ends up accidentally running into the mother of the dead child, who is working at a branch of the public library. Cici begins watching the mother, Terry, and becomes mired in a web of lies as she spends more and more time watching the grieving mother of her victim.

All of this might make Cici sound unbalanced (and maybe, in a sense, she is), but Hugo writes her characters with such empathy and compassion that the reader is able to understand pretty much everyone in the novel--when from an objective point of view, many characters' behavior might seem inexplicable. That's one reason why I really like Hugo's choice of point of view. She chooses to have a limited-omniscient narrator, focusing on one character at a time. This gives the entire narrative a very smooth feel--no bouncing from narrator to narrator, but we get multiple points of view.

As Cici's life seems to fall apart--her relationship with Rid seems completely broken, she has lost her beloved mother when she wasn't really ready for that loss, and she is obsessed with somehow making sure the living victim of the worst mistake of her life is okay--she becomes endangered by a series of spooky stalking incidents.

A Matter of Mercy is incredibly absorbing. I became so attached to both Cici and Rid, even as they acted like silly teenagers some of the time. Hugo knows how and when to tighten up the tension, and the various story-lines (Cici and Rid, Cici's guilt over the accident, the lawsuit and the stalking incidents) are woven together so expertly that the story never slows down.

I absolutely loved A Matter of Mercy. The characters were entirely human and real, and very sympathetically drawn. The novel has beautiful writing, and a wonderful sense of place. I highly recommend A Matter of Mercy, especially for readers who enjoy the books of Nancy Thayer and Jodi Picoult.

For more about Lynne Hugo and her books, go to the author's web site at:
lynnehugo.com

Posted by bibliophiliac at 10:54 AM

Trust and a sense of place are two big draws in a novel for me. This one sounds like it is right up my alley!

Great review! I like stories where characters are struggling with the past and making amends. Will have to keep an eye out for this one!

@Heather-Thanks, I really enjoyed this one!

@Iliana-This one is definitely worth looking for!

I really can't thank you enough for this sensitive, insightful, articulate, and beautifully written review. An author really can't ask for more than a reader who really gets what s/he worked to put into a novel, and you have.

@Lynne Hugo: Thank you so much. Your comment made my week!