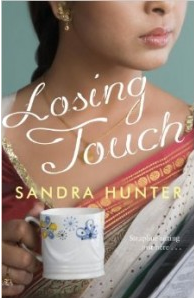 Sandra Hunter's debut novel, Losing Touch, tells the story of a family who have emigrated from India to London after Indian independence. The novel begins in September of 1966 with a funeral: Jonti, a young assistant architect, brilliant, a family man, has been cut down in his prime by an unknown disease. The reader is introduced to Jonti's brother, Arjun, and Arjun's family in the brief funeral vignette, and then the next scene is more than a year later. The novel uses this unusual structure to depict the family structure, repeated patterns of behavior, and deeply rooted conflicts. Each chapter takes place at least a year later than the preceding chapter, and sometimes the gap is multiple years...in one case, there is a twenty year gap.

Initially I found this structure puzzling and a little disorienting: in a traditional narrative structure, the reader settles into a rhythm that somewhat resembles daily life, and gets to know a set of characters this way. In Losing Touch, the chapters have a much more fragmentary feel, and there is definitely a sense of time passing over the course of years. But as I settled into the rhythm of Hunter's novel, I found that the narrative distance was delicate and sensitive, and the characters began to feel like neighbors I had been seeing grow and change over years.

Arjun is a character who is not easy to like: he is rigid, judgmental, and not always kind to his wife and children. His marriage to Sunila seems to be mutually unhappy. Sunila, a devout Christian, dares to day the word "divorce" only in the privacy of her own mind. It is clear that the marriage is occasionally abusive, and that Arjun suffered abuse himself as a child, and unkowingly passes this dysfunction on. The children, Murad and Tarani, are not close: Murad is twice privileged, being male and the oldest. And Tarani takes much of the brunt of her father's bitterness and dissatisfaction. Arjun, meanwhile, wishes he were closer to his children, sees only the bad in his wife Sunila, and quietly lusts after his widowed sister-in-law, Haseena.

Hunter builds her story slowly, with details plucked from daily life: meals, family gatherings, Tarani's forays into fashion: platform shoes and bell bottoms that make her look like a "dolly bird." Interspersed, chapter to chapter, are Arjun's symptoms, which begin in chapter one, but are slow to make themselves known. The chapter titles read like a list of symptoms: "a tendency to fall," "complications," "tremors when the patient's hands are held out." Another writer might have made Arjun's symptoms and illness a dramatic cusp, but Hunter wisely weaves Arjun's illness into the fabric of the novel. The illness is just another pattern, like the family's inability to communicate, and their tendency to lose one another in a maze of inarticulate communication.

For a relatively slim book, Losing Touch takes an extreme long view of its character's lives. Hunter follows Arjun and Sunila into their old age, as Arjun slowly succumbs to the disease which has been his fate. The novel builds to a surprisingly poignant finish. Losing Touch is very much like life: filled with errors and regrets, but astonishingly sweets and filled with love and joy. Losing Touch has a quiet power, and is the work of a highly accomplished writer--its hard to believe this is Hunter's first novel.

Posted by bibliophiliac at 5:52 PM

I really came to like that skipping of time between chapters. It allowed for something of a family saga while concentrating only on the important points of a small part of the family's lives.

Just jumping into the conversation here! Thanks for your comment, Lisa. Using annual intervals allowed those moments of connection and disconnection to arrive at a more subtle level.

Thanks for being a part of the tour! i'm featuring your review on TLC's Facebook page today

@Sandra-I loved this technique....You dealt with time in a really interesting way, and it was very effective in the end. I particularly liked the way it worked for showing relationships in the long view.

Thanks so much -- I'm glad it resonated.