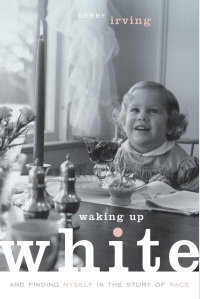 In Zora Neale Hurston's novel Their Eyes Were Watching God, there is a moment when Janie, the main character tells her friend Phoeby about when she realized she wasn't white. Janie is six years old, being raised by her grandmother alongside the white children of her grandmother's employer. When she sees a photograph of herself with the other children, the mother of the white children has to point out where Janie is in the picture--and that's when she first realizes: "before Ah seen the picture Ah thought I wuz just like the rest."

Debby Irving's memoir, Waking Up White, details the writer's journey toward understanding her own place in the world: she wakes up to the fact that, far from being racially "neutral," she is white, and that with whiteness come privileges, benefits, and advantages not accessible to non-whites in this country. As Irving says in her introduction:


I thought white was the raceless race--just plain, normal, the one against which all others were measured.

What I've learned is that thinking myself raceless allowed for a distorted frame of reference built on faulty beliefs.


Irving's book describes how taking a college course on Racial and Cultural Identity awakened her to an awareness of her own racial identity, and how her own ignorance of racial privilege interfered with her well-meaning attempts at bridging racial gaps.

Irving's book is deeply personal, and excruciatingly honest. It is not simply a memoir, but Irving uses the technique of memoir to achieve her ultimate goal: to communicate the devastating effects of structural racism on all Americans, of all races, and to both model and lay the groundwork for progress toward racial justice. It is obvious from page one of this book that Irving is deeply passionate about her goals, and that she is willing to be brutally honest, exposing her own faults and flaws in order to reach those goals. By sharing her own story, Irving disarms her reader: when Irving makes such a point of dropping all of her own defenses, it is hard for the reader to be defensive about Irving's underlying message.

Reading memoir often gives me a queasy feeling: contemporary memoir brings the reader so close to the storyteller that you can feel as though you are right there inside the writer's skin. This can be deeply discomforting--as if reading a book about race in America isn't discomforting enough to begin with. Race is such a highly charged topic, one that often reduces participants to divisive language. The truth is that in our culture, it is very rare for people of different races and cultures to have deep, meaningful conversations and relationships across this divide. And when the conversations do take place, they are often conducted in a tentative way, folks on both sides fearful of misunderstanding, ready to pull back.

Debby Irving shares a story that will probably feel familiar to many white readers, and shock readers of color. She tells of a childhood almost entirely insulated from any understanding of the Civil Rights Movement, racism, or the experiences of people unlike herself, a white, wealthy child of privilege. This may seem extreme and maybe even unbelievable to some readers, but it is her journey, her experience, and she shares it unflinchingly.

The writer also tells of her longing, after reaching adulthood, for more diversity in her friendships and other relationships. But her total lack of awareness, her ignorance of her own privilege and entitlement, and her urges toward doing good and "fixing" people of color frustrated her attempts. It is only after examining her own racial story, with an unpacking of both her privilege, and the systematic, structural racism experienced by others, that Irving is able to form true friendships and work relationships, or even have authentic conversations with people of color.

Waking Up White has very short chapters, and each chapter addresses a basic principle or idea of race and identity. Irving uses abundant examples from her own life in each chapter. She is courageous in doing so: many of the incidents she relates are cringeworthy, embarrassing, and humiliating. One that really stands out is when Irving is attending a conference recommended by a racial justice colleague, a conference by and for professionals of color. During the first session Irving attends, she stands up and makes some comments that were probably perceived as "whitesplaining." In her recollection of the incident, Irving is unsparing as she relates her own missteps, and the backlash of anger from attendees as her intent does not match the impact of her words with this audience. Then she relates the kindness and compassion of a half-dozen black attendees who stay after the session to comfort her in her meltdown. Irving's own insecurities are laid bare here, and she shows the reader just how easy it is for even well-intended words and actions to have a hurtful impact. It is impressive to me that Irving always seems to use such experiences to learn--she never just wallows in her own pain.

It is Irving's deep sense of humility and purpose that awed me while reading this book. She puts herself entirely out there, showing the reader mistakes and missteps on her journey toward understanding how deeply white privilege has implicated her and all whites in the history of racism in this country. At the end of each chapter, there are brief exercises, mostly intended for white readers.

It is impossible to read this book and not examine your own racial identity, your understanding of race and privilege in this country, and your own steps toward developing equity. Irving's goal is to work toward racial justice and understanding, but any reader, of any race, might want to examine how our personal and professional relationships might be improved.

As a white woman married to a black man, I have, as Irving puts it, a foot on each iceberg (the iceberg metaphor has to do with outward behaviors, which are shallow, and the ideas and experiences behind those behaviors, which are deep). Because I operate in two worlds that overlap, much of my reading is on racial topics: fiction, essays, classic and contemporary writers.I'm just fascinated by the topic of race in America: to me it is the subject, unavoidable, and deeply and inextricably bound in the life of every American. Waking Up White is one of the best books I have read on this topic because it is so relentlessly honest. Because I know I can always do better, I can always learn to listen more compassionately, and I will always have behaviors that could be improved, I found Waking Up White to be extremely useful for examining my own behaviors and attitudes. As a high school teacher, I can never be too thoughtful in the way I approach conversations with my students, their parents, and members of our community.

I recommend this book to everyone, honestly. It is real, and it is true. Some readers might want to focus on the personal details of Irving's story; white readers might want to distance themselves from this story, telling themselves I'm not like that. But no matter what your racial identity is, everyone has one, and if the enormous force of structural, systematic racism is going to be dismantled, we all have to share in the work.

Waking Up White is available from Debby Irving's website, which also has a number of excellent resources for readers and educations, and from independent booksellers, as well as Amazon and Barnes & Noble.

Debby Irving works as a racial justice educator and writer; she has worked as an arts administrator, a classroom teacher, and a board member. She and her husband Bruce live in Cambridge, Massachusetts with their two daughters.

Posted by bibliophiliac at 5:55 PM

You've convinced me I need to read Waking Up White. It's a subject that has always interested me and it sounds like Irving brings a different and much needed perspective to the floor. Thank you for bringing this book to my attention!

@Literary Feline-that's good to hear-I hope you get as much out of it as I did.

You had my attention when you mentioned THEIR EYES WERE WATCHING GOD - it's one of my all-time favorite books!

I'm glad to see how highly you recommend this book. Thanks for being a part of the tour!

"Waking Up White" is one of the most important books on race in recent memory. Great, insightful review.