Review: The Conditions of Love 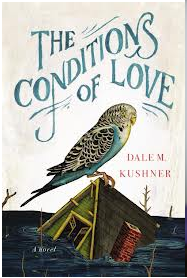 
Love is at the center of Dale M. Kushner's debut novel--and not just romantic love, but parental love, friendship, even the love between a woman and her parakeet. The Conditions of Love is the story of Eunice, who is ten years old when the novel opens in 1953.Eunice's mother, Mern, had Eunice at age seventeen. Eunice's father is a handsome ne'er-do-well who disappears from her life when she is an infant, only to reappear just long enough for Eunice to love him worshipfully. Then, of course, he disappears again.

Eunice's childhood as an outsider, raised by a moody and haphazard mother, sets her up for a lifetime seeking love and connection. The novel is divided into sections, with each section corresponding to a period in Eunice's life....and to her spiritual and romantic searching. There are lifebuoys in Eunice's life, but no solid anchors. Mern is undependable, mercurial, and often more childish than her daughter. A neighbor teaches Eunice about opera and friendship; one of Mern's suitors feeds Eunice and longs to take care of her. But relationships are fleeting for Eunice, and she becomes a kind of orphan at sixteen, completely unmoored, trying to invent a life for herself.

The Conditions of Love is written in a lush style, driven by character and voice. The mother-daughter relationship is central to the novel, but so are all the various relationships than encompass love, up to and including romantic and sexual love. The story is told in a kind of torrent of words, and many details and facts are more or less glossed over (Eunice's schooling, for instance, or any peer relationships). The novel is set during an era of cataclysmic change in this country, and most of it is never mentioned (the Civil Rights Movement, Vietnam, and other social and political movements are peripheral at best). The Conditions of Love is the story of an outsider, a lone child who in some senses is nearly feral (Eunice gets many of her ideas of how men and women relate to one another from Hollywood movies).

All that being said, I thoroughly enjoyed The Conditions of Love. Dale M. Kushner explores love and forgiveness without ever being predictable or cliche; this novel is the farthest thing from a formula romance novel. As Eunice grows throughout the novel, she develops from a preternaturally wise child, to an impetuous and foolish teenager, to a forgiven and forgiving young woman. If you like character-driven fiction, and are drawn to stories about relationships at their most complicated, you will probably find yourself enthralled by The Conditions of Love.

Dale M. Kushner has a web site at http://dalemkushner.com

Posted by bibliophiliac at 7:33 PM

I received this ARC from Netgalley and got about 100 pages in before just forgetting about it. I actually liked the novel but never felt the urge to go back and pick it up. It's been about a month and still no progress. I think it's safe to say it won't be finishing anytime soon. It's almost sad because I actually liked Mern's character or the skill taken to create her. She was so different than any other mother I'd come across before in a work. Hopefully I'll give it another go considering you enjoyed it and found it refreshing. Thanks!

This one sounds so good to me, the way you've described it. Thank you so much for being on the tour!

Thanks for taking the time to discuss this, I feel strongly about it and enjoy learning more on this subject. If possible, as you gain expertise, would you mind updating your blog page with more info? Its extremely helpful for me....Cccam Server

Much gratitude for your thoughtful and astute review of my novel, The Conditions of Love. The book is set in the 50's and early 60's and references realistic details of the period, but, as you hinted, the story's structure is layered and mythic and unfolds as a heroine's journey. Isn't that how life is sometimes? Our rational minds corral us to the here-and-now, but our hearts lead us to a timeless place!
Part of what I was exploring in The Conditions of Love has to do with the often complex relationship between mothers and daughters, and also the stifled creativity of women's lives in the 50's. I do believe the personal is political, and I hoped to convey the politics of the time by the attitudes of the characters toward race, class, gender, sexuality.
Thank you again for your great review. "Enthralling" is a fantastic attribute!

@Dale M. Kushner-thanks for taking the time to respond to my review. The mythic quality of the novel, and of Eunice's journey was what most captivated me. In some ways Eunice's story seemed to exist outside of time.


Hi Bibliophiliac:That's a very astute observation you make--yes, in a way the novel does exist both in and out of time. TCOL concerns itself with fate. That is, just because we are born under a "dark star," does that mean we are doomed to a tragic life? If not, what are the forces the lead to survival and resiliency? I see these forces as part rational, conscious will but also something more mysterious, how we allow or do not allow ourselves to keep our hearts open. Eunice, my narrator, suffers a great deal but her sorrows don't make her bitter. This itself is a mystery, isn't it! Oh I have so much more to say...maybe other readers want to join in here.

@Dale M. Kushner--we should do an interview! If you have time for an interview, email me. I've interviewed Andre Dubus III and Gergory Spatz, and love coming up with questions (good books always leave me with questions...).

I'd love to do an interview, Lisa. Please let me know the details at TheConditionsOfLove@gmail.com.

Thanks so much! Dale