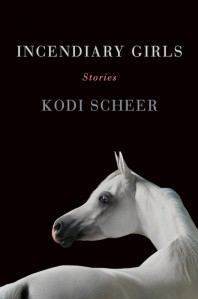 
Kodi Scheer writes in the tradition of magical realism. When I first started reading this collection, there was just enough realism in the magic that I was just thinking the characters were crazy. But when a woman's boyfriend turns into a camel (in "When a Camel Breaks Your Heart') or a medical school cadaver starts talking (and turning up everywhere the medical student looks) we're talking a different shade of crazy.

My first thought was---oh, this is kind of like Rachel Ingalls, T.C. Boyle,or Russell Edson. Then I read an interview with Scheer, and she mentioned Kafka, Marquez, Angela Carter, and Aimee Bender. Ohhhhh. Gotcha.

But by then I was hooked anyway.

I have to admit, when the main character in "Fundamental Laws of Nature" realized that her daughter's lesson horse was her mother, reincarnated, I wasn't so sure. I wasn't quite getting the humor. Because Kodi Scheer's stories are slyly humorous, sometimes dark, and sometimes radiant. Yes, Angela Carter and Kafka make sense as influences.

The stories do have a unique voice, one that is rooted in an understanding that the human body is inevitably going to betray us. This gives the stories a sadness beneath the humor and the surrealism. I have three favorite stories in this collection, so I'll talk about each of them. First, "Salt of the Earth" is a narration (in the second person plural) in the form of a unofficial town bulletin. The town has been hit by a weird virus that causes people to suddenly and irrationally fall in love. Kind of like real life, but more extreme and extremely funny. Picture a Garrison Keillor type town whose citizens suddenly run amok French kissing at the pancake supper or the Little League game. What I loved about this story, besides the fact that it made me laugh out loud, was the pitch perfect voice of the town.

"Primal Son" is the story of a couple who keep trying, unsuccessfully, to get pregnant. The wife is a scientist. When she finally becomes a mother, she's just a little bit disappointed:


Olivia's baby had ten long fingers and ten toes. The doctors said he was perfectly healthy despite the thick black hair that covered most of his body.

The movement from dismay and disgust toward acceptance is touching and sweet...and involves a gorilla suit. Somehow the story kept taking turns....as soon as I had decided it was purely comic, it became a serious meditation on love and what it means to be human.

By far the best story in the collection is the title story, "Incendiary Girls." The story is narrated by a sort of angel of death, and it follows a young Armenian girl named Vartouhi during the Armenian genocide in 1915. It is simply a stunning, beautiful story, and I'd recommend this collection just on the basis of "Incendiary Girls.'

Kodi Scheer originally planned to become a doctor, and her experience in the medical field informs her writing. She currently teaches writing at the University of Michigan, and was recently awarded the Dzanc Prize for Excellence in Literary Fiction and Community Service for her work with cancer patients and their caregivers. The $5,000.00 prize will be used to establish a creative writing workshop for cancer patients and their caregivers at a Michigan hospital.

More information about the author and her books are available at the author's website:
http://kodischeer.com

Posted by bibliophiliac at 2:54 AM

That cover is really creeping me out. But as to the book, I'm a fan of magical realism. I'll have to check it out.

@Trisha-Haha! The cover is both beautiful and somehow disturbing... a lot like the stories!