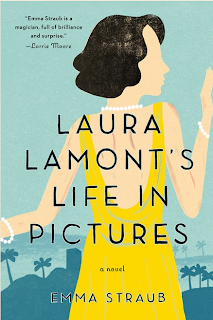 Laura Lamont's Life in Pictures is a beguiling tale of one woman's life through the prism of old Hollywood. Emma Straub's debut novel is gorgeously crafted; I couldn't put it down. Days after finishing this novel, I was still struggling to articulate just why I loved this book so much. The subject matter is part of the allure; I'm one of those people who will watch old movies for hour on end. My idea of a good movie is something like Since You Went Away, a 1944 tearjerker starring Claudette Colbert, Jennifer Jones, and Joseph Cotten. That's my kind of movie, and it's the kind of movie I could imagine being made by Straub's fictional Gardner Brothers motion picture company. But there's more to this novel that the recapturing of a bygone film era. It's Straub's distinctive prose style: imagistic, precise, and disciplined. What some writers might take reams of pages to say, Straub accomplishes with one eloquent image. Straub's prose style is tensile yet delicate, lush yet retrained, and reading Laura Lamont's Life in Pictures is as deeply pleasurable as watching the perfect movie unfold before you.

The story begins in Wisconsin, just as the country is about to enter the Great Depression. In Door Country, Wisconsin, 9-year-old Elsa Emerson is "the blondest, happiest accident," the youngest daughter in a family whose life revolves around the stage. Elsa's family runs the Cherry County Playhouse, and every summer young people arrive from all around the country to put on plays directed by Elsa's father, John. Elsa has two older sisters: plain Josephine, a closeted lesbian, and glamorous Hildy. Hildy plans to run away to Hollywood to become a star, and Elsa is the adoring little sister who absorbs Hildy's dreams and fantasies. A tragedy strikes the family, and Elsa absorbs much of the shock, taking on her sister's dreams as her own. Just nine years later it is Elsa who runs off to Hollywood, having married the first likely fellow, a playhouse actor named Gordon Pitts.

Once in Hollywood Elsa quickly becomes pregnant, giving birth to a girl she names Clara. Gordon gets a few small parts in films, eventually landing a contract with Gardner Brothers. It is while attending a party for one of Gordon's films that Elsa meets Irving Green, a producer for Gardner Brothers. Heavily pregnant with her second child, Elsa is discovered by Green in a moment straight out of a Hollywood film:


"Here's what you should do. Do you mind if I tell you?" Irving didn't wait for her to respond. "Have the baby. Take a few months, lose thirty pounds. Not so much that you lose the milkmaid look, though. It's your trademark---Miss Wisconsin, all sweetness and light. And Elsa Pitts isn't going to cut it, is it?" Irving looked at her hard. Elsa blushed. He stared at her so long that Elsa began to sweat even more. She reflexively put her hands around her belly, as if to protect the child from whatever was to come. Then Irving snapped his fingers so loudly that it echoed through the room, over all the chatting and flirting. Elsa was surprised that such a sharp, loud noise could come out of such a small person. "Laura Lamont," he said. "You want it? It's yours. Come see me when you're ready."

Not only is a star born out of this encounter, but a love affair is born also. This is the big love affair of Laura Lamont's life, and soon Elsa is Laura, with a new biography, a new hair color, and a whole new identity.

Laura Lamont's Life in Pictures tells the story of Elsa/Laura's life over a span of fifty years: her marriages, her deep and abiding friendship with her black housekeeper (reminiscent of another tearjerker, Imitation of Life), and the triumphs and failures of her career. I absolutely loved this novel; the mythic story, the Hollywood glamour, the bits of self lost along the way, and the sheer endurance of the main character. I highly recommend Laura Lamont's Life in Pictures--especially if, like me, you love to settle in with Turner Classic Pictures for an evening. A gold statue for this one.

Posted by bibliophiliac at 11:42 AM

I liked this book but don't think I liked it as much as you did.

I meant to read this when it first came out in hardcover and never got around to it. Hopefully I will soon!

@bermudaonion-it's that movie addiction! I just wanted to watch TCM all day after I read this book....

@Jennifer-hope you get a chance to read this one!

Oh goodness, you had me when you mentioned your love of old movies. I need to read this one now :) I too can sit in front of TCM for hours watching those :)

@Kelly-if you are a TCM fan then you will probably like this book!

I think I would love this one too. I adore old movies. But for some reason I just keep thinking of Lina Lamont, the character from Singing in the Rain. Will have to get over that name similarity when I read the book.

@Amanda-oh yeah, isn't she the one with the squeaky voice and awful accent? She couldn't make it in talkies!