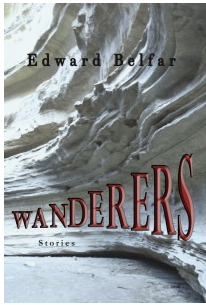 Edward Belfar's short story collection Wanderers takes the reader from Nairobi to Rome to Baltimore, and yet there is a consistent mood or tenor across the stories. Belfar's characters are disaffected, caught in conflicted marriages (or divorces), and often turning to drink to drown their troubles. This is not a collection to turn to for uplifting epiphanies, but if rueful observation and wry commentary on the human condition appeal to you, then this book might be for you.

As I read Wanderers, I found myself appreciating the somewhat dark sensibility of the author, although a few repetitive tics were off-putting. One thing I noticed is that there were very few sympathetic female characters in Wanderers, although, to be fair, men don't come off much better. In a couple of the stories the women (wives or ex-wives) were just too thoroughly witch-like; Roman Honeymoon had me wondering why on earth this couple had gotten married. The most successful stories, such as Eviction and Leaving the Chesapeake, have main characters who are bitter, but their rancor is turned mainly inward. And Errors ends with an act of decency that rings true without detracting at all from the general cynicism of the story.

The strongest stories in Wanderers begin with Peacock---or it could just be that that is when I began to enjoy the writer's voice, and his decidedly gimlet eye for detail. As the stories (it seemed to me) got progressively better, the collection as a whole began to grow on me. I would compare Belfar's work to Richard Yates, or maybe Charles Bukowski---not for the faint of heart, but edgy and complex. Although most of Belfar's main characters are male, I quite liked Departure, in which a woman returns to Kenya for a visit with relatives who mostly irritate or mystify her. Departure ends on a quiet, understated note, and not much happens in the story but it is gracefully written and nuanced.

The stories in Wanderers have their own bleak beauty, and I would definitely recommend this collection, especially to fans of Richard Yates. This is a writer whose future works I will follow with interest.

Posted by bibliophiliac at 6:23 PM

I made a mini resolution last summer to read more short stories. As I get my home library entered into Goodreads, I'm finding I have a pretty good collection, Flannery O'Connor being my all time favorite (but then, I live in Savannah so that's a given). She also had a rather dark voice...softly jolting.

@Grad--Flannery O'Connor is one of my favorites too. I especially love A Good Man is Hard to Find and Good Country People.