The Pillow Book of Sei Shonagon 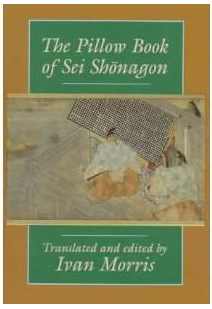 My copy of The Pillow Book of Sei Shonagon is bristling with sticky notes and little slips of paper. Sei Shonagon was born in Japan more than a thousand years ago, and served as a lady-in-waiting in the court of Empress Sadako in the last decade of the tenth century. What I love about this book is how the vivid and lively writing of Sei Shonagon makes me feel as though I am witnessing scenes from court life. And then there is Sei Shonagon's personality, revealed in her minutely detailed lists and observations on all that is beautiful and all that is annoying in her daily life.

Here is a description of the Empress:

Could anything surpass this conversation between the Empress and her brother? This was the sort of exchange that is so eloquently described in romances; and the Empress herself, arrayed in a white dress, a robe of white Chinese damask, and two more layers of scarlet damask over which her hair hung down loosely at the back, had a beauty that I had seen in paintings but never in real life: it was all like a dream.

The Pillow Book of Sei Shonagon is filled with  poetic descriptions of ceremonies, festivals, and court happenings. There are also lists of hateful things, splendid things, awkward things, and so on. I first discovered Sei Shonagon when looking for examples for my creative writing students, and often use her writing as a model text. But there is so much sheer delight to be had in simply reading this book a bit at a time--the prose is so enthralling and so entertaining it is hard to stop, although there is no real narrative thread, and the entries have come down to modern readers as a collection of random entries. The best way to read this book is to keep it at your desk or your bedside, and then to fall into it from time to time and keep reading--or jump around from entry to entry.

Here are a few passages that I found striking:
From Clouds: "I love white, purple, and black clouds, and rain clouds when they are driven by the wind. It is charming at dawn to see the dark clouds gradually turn white....It is moving to see a thin wisp of cloud across a very bright moon.
From Things That Have Lost Their Power: A large boat which is high and dry in a creek at ebb-tide. A woman who has taken off her false locks to comb the short hair that remains. A large tree that has been blown down in a gale and lies on its side with its roots in the air. The retreating figure of a sumo wrestler who has been defeated in a match...
From Things That Make One's Heart Beat Faster: Sparrows feeding their young. To pass a place where babies are playing. To sleep in a room where some fin incense has been burnt. To notice that one's elegant Chinese mirror has become a little cloudy. To see a gentleman stop his carriage before one's gate and instruct his attendants to announce his arrival....

This edition of The Pillow Book of Sei Shonagon has an informative introduction by translator Ivan Morris, and extremely helpful and detailed notes and appendices prevent the modern reader from feeling lost; there are illustrations of interiors, instruments, and even the types of carriages referred to in the text. The casual reader will probably prefer to simply enjoy the beauty of the prose, but it is nice to know the notes are there for the curious or scholarly.

This book fulfills the "Classic Translated" category for the Back to the Classics Challenge 2012 (hosted by Sarah at Sarah Reads Too Much).
Posted by bibliophiliac at 9:38 PM

I ve seen the film version of this ,I must try to read it at some point it is a classic of translated fiction ,all the best stu

I suspect most people who read this end up with their copy "bristling with sticky notes and little slips of paper". Mine certainly is. Mine is the Penguin translation by Meredith McKinney. It would be interesting to compare them.