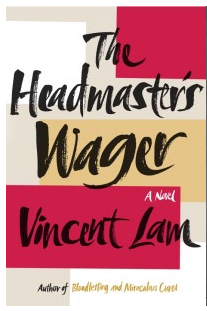 The Headmaster's Wager
by Vincent Lam
Hogarth
hardcover, 2012
426 pages
a copy of this book was provided to me by the publisher through TLC Book Tours

The Headmaster's Wager is a book that will take days, if not weeks, for me to absorb. Vincent Lam's novel is the kind of book that takes some time for me to process; while reading The Headmaster's Wager, I was held in the grip of the narrative, pleasurably absorbed and intellectually stimulated, but mostly being pulled along by the force of story. Now I just want to savor the experience, the way I might want to remember an especially long and eventful dream. The book is filled with history, war, and ancient enmity, but it tells a story that is as basic and primal as the longing of a father for his son, or a son for his father.

The novel begins just after the New Year, in 1930 in China, not long before the Japanese invasion. Chen Kai is preparing to leave his family to go to Vietnam, to "Gold Mountain," to seek his fortune. He gives his son, Chen Pie Sou, the family good luck charm, an unformed lump of gold, before he leaves. Chen Pie Sou, who later changes his name to Percival Chen, is the main character of the novel, and as complex and complicated a man as could be imagined. He settles in Vietnam, but never assimilates. Chen Kai's rice business becomes an English school, and Percival Chen is the respected headmaster when the narrative resumes in 1968 Cholon and Saigon, Vietnam. Percival Chen is divorced, with one beloved son, Dai Jai. Chen oversees his successful school during the day, and drinks, gambles compulsively, and womanizes at night. He is a character who is enormously appealing for his loyalty to his son and to his revered employee, Teacher Mak, but Percival Chen is also enormously flawed, and blind to much of what goes on around him.

The novel's action is triggered in part by Chen's blind loyalty to and pride in his Chinese roots. Even though Chen has lived in Vietnam for decades, and has made his fortune there, he avoids learning the language well, and sends his son to a Chinese school. When Dai Jai, just sixteen years old, decides to publicly rebel against the Vietnamese requirement that all students learn the Vietnamese language, events spiral out of control. Chen is accustomed to using connections and bribery to circumvent rules and laws, but suddenly he is face to face with a new political reality, and a new level of violence.

The stakes in the novel are raised as the headmaster finds himself deeply in love with Jacqueline, a mixed race young woman who was once a student at his school. The birth of a son, Laing Jai, on the eve of the Tet offensive, forces Percival to rethink some of his prejudices and previously held beliefs. As the novel unfolds, the reader begins to suspect that Chen is not fully living in reality; he is sometimes trapped in the past, sometimes living in a present that doesn't really exist. And much of what is really happening around him, Chen refuses to see until he can refuse no more.

There is too much going on in The Headmaster's Wager to even begin to summarize the events of the novel. There is violence and war, brutality inflicted by various regimes and shadow regimes, and an absoltuely fascinating portrayal of Saigon in the 1960s and 1970s. Gambling is both an addiction for Chen and a trope within the novel, and themes of racial and national identity, corruption, deception, and betrayal, and father son relationships are tightly interwoven in a compelling and utterly absorbing narrative. This is a novel to read for story first and foremost, and also for the history and the deeply profound questions this novel makes the reader ask. Most of all, it is Percival Chen, flawed, addicted, and deeply human, who the reader will remember long after closing the pages of this book.

Posted by bibliophiliac at 7:18 AM

This book has been staring at me from across the bookshop every day, but yours is the first review I've read of it. It sounds quite good.

I love a book that stays on my mind like that.

I read Lam's previous novel, Bloodletting and Miraculous Cures and wasn't impressed. Might check this one out because I'm always up for giving Canadian writers second (and third, and fourth) chances.

Thanks for sharing your thoughts on this book for the tour. I'm featuring your review on TLC's Facebook page today!

Wonderful review! I don't think I'll ever forget this book. No, I know I won't. Amazing read.

I've just started this one and haven't really gotten hooked yet. But now that I know I'm going to be, I'm going to stop reading blogs and get back to it. Thanks!

I had not heard of this book before, but you seem very passionate about it and, on that strength alone, I will try to get a copy from the library! Great review...I am so anxious now to read this book.