Top Ten Tuesday is a bookish meme hosted by The Broke and the Bookish. This week's list is the top ten books you would recommend for someone who liked a particular book. In this case, I'm going to go with a book that is a lifelong favorite of mine (I guess you could say it is one of my touchstone books), Jane Eyre. So, I'm going to recommend ten books for someone who liked Jane Eyre, or who maybe is just developing an all-around Bronte obsession. The Brontes are undeniably fascinating, and I've read fairly widely in the literature about the family from Haworth Parsonage, but I'm sure I haven't even don more than skim the surface of what's available. So, here is a list to begin building your own Bronte obsession.... 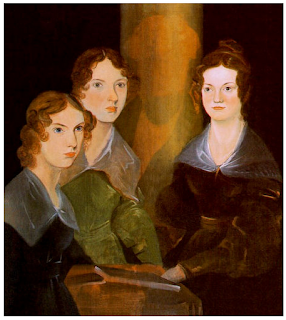 Top Ten Books I'd Recommend for a Bronte Obsession:

1. Wuthering Heights by Emily Bronte. Emily's classic novel is very different from Charlotte's, but the sisters shared a Romantic view of the world, heavily influenced by the Romantic poets.
2. Villette by Charlotte Bronte. This novel is a more autobiographical novel by Charlotte; it gives the reader insight into Charlotte's experiences in Brussels, where she and Emily both taught at a boarding school.
3. Agnes Grey by Anne Bronte. Charlotte's sister Anne wrote her own novel about a governess.
4. The Tenant of Wildfell Hall by Anne Bronte. While Anne's novels don't have the technical brilliance or the narrative drive of those of her sisters, she did create a satisfying novel in the Gothic tradition.
5. Wide Sargasso Sea by Jean Rhys. Jean Rhys reworks the story of Bertha Mason in this brooding novel which examines questions of class, power, ethnic origin, madness and cruelty.
6. The Flight of Gemma Hardy by Margot Livesey. Livesey takes Jane Eyre as her inspiration in this absorbing reimagining of the classic.
7. Bronte by Glyn Hughes. A novel about the Bronte family, Bronte is a fictional depiction of family life at Haworth Parsonage. This novel is out-of-print, but I think it's worth hunting down a copy.
8. The Bronte Myth by Lucasta Miller. Miller examines the hagiography of the Bronte family, and explores the various permutations of myth and legend about the famous family.
9. The Life of Charlotte Bronte by Elizabeth Gaskell.There are other good biographies of Charlotte, but this is the only one by a contemporary of Charlotte, and her close friend. Elizabeth Gaskell was, of course, a well-known novelist in her own right, best known for Cranford and North and South.
10. Tales of Angria by Charlotte Bronte. As most people know, the Bronte children created a large body of imaginative work from the time they were children. Branwell Bronte received a gift of toy soldiers from his father, and soon these soldiers had inspired the fictional worlds of Gondal (created by Emily and Anne) and Angria (created by Branwell and Charlotte). Tales of Angria is available from Penguin Classics.

That is just tiny fraction of Bronte-related books....What are your favorite Bronte books?

To see what other people said, or to join in the meme, go here.


Posted by bibliophiliac at 4:16 PM

I should probably read Jane Eyre before I tackle the books on your list.

@bermudaonion-except The Flight of Gemma Hardy: read that now!

Jane by April Lindner is a great YA retelling of Jane Eyre. It actually made me appreciate the original novel much more. I'm much more of a "Wuthering Heights" fan. :)

As a Bronte fan rapidly running out of Bronte books, I was all over this post! :P

Having just finished The Flight of Gemma Hardy, I think maybe Wide Sargasso Sea might need to come up soon on my reading schedule.

Favourite: Wuthering Heights. Love Jane Eyre and Agnes Grey, too. Liked Villette. Haven't yet read The Tenant of WIldfell Hall but soon! I read Daphne du Maurier's account of Branwell's life: The Infernal World of Branwell Brontë, loved it. I'm obsessed with the Brontës too, how could you not, right?