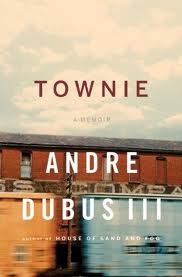 Townie: A Memoir
by Andre Dubus III
paperback, 387 pages
W.W. Norton
a copy of this book was provided by the publisher

Andre Dubus III is the son of renowned short story writer Andre Dubus, and the presence and absence of the elder Dubus is one of the shaping forces of this mesmerizing memoir. The other shaping force is the specter of physical violence. Townie is a memoir that transcends genre in several ways: the fluidity of the narrative, the presence of complex themes, and the beautifully observed details all make this work of nonfiction read like a novel.

Dubus tells a story of living with his educated mother and three siblings in impoverished suroundings, in neighborhoods that are dangerous, filled with drugs and violence. After his parents divorce, Dubus and his brother and sisters are left to fend for themselves as his mother struggles to put food in the cupboard and a roof over their heads. The family moves from one rental house to another, but certain things are constant: there is never quite enough food, the siblings spend hours home alone in the afternoon, and bullies roam the neighborhood.

A turning point comes for Dubus when his younger brother is beaten by a grown man, who then calls Dubus's mother a whore. Dubus locks himself in a bathroom and looks in the mirror.

After this point, Dubus becomes obsessed with working out, building muscle, and making himself strong. He succeeds. Dubus becomes a boxer eventually, and a street fighter, a protector of those too small or weak to fight. Violence is woven throughout Townie: the violence of street bullies, the violence of sociopaths in barrooms and schoolrooms. Dubus discovers a secret about violence:


....you have to move through two barriers to do something like that, one inside you and one around him, as if everyone's body is surrounded by an invisible membrane you have to puncture to get to them. This was different from sex, where if you both want it, the membranes fall away, but with violence you had to break down that membrane yourself, and once you learned how to do that, it was easier to keep doing it.

And Dubus keeps doing it. The violence escalates as Townie goes on, and Dubus makes no excuses for himself--nor does he glamorize or valorize his attacks--some of which are self-defense, and some of which are something more disturbing.

As Dubus redefines himself through muscle and violence, he is also redefining his relationship with his father. Andre Dubus was a highly regarded writer who taught at Bradford College, just across the Merrimack River from the run-down neighborhoods where his son lived. While Dubus did spend time with his four children from his first marriage, he was disconnected and removed from their lives in important ways. Townie traces the relationship the younger Dubus has with his father as a young man, and later in life, after the elder Dubus suffers a life-changing accident.

My favorite passages in Townie are those where Dubus talks about writing. After years of training (lifting weights, running, briefly training for the Golden Gloves) one day Dubus skips his training session. Instead, he makes a cup of tea, sits down at his kitchen table, and writes a story. Here is a later passage, one that captures the feeling of Dubus beginning to see himself as someone who needs to write:


....I felt more like me than I ever had, as if the years I'd lived so far had formed layers of skin and muscle over myself that others saw as me when the real one had been underneath all along, and writing--even writing badly--had peeled away those layers, and I knew then that if I wanted to stay this awake and alive, if I wanted to stay me, I would have to keep writing.

Thursday, March 22nd I will post my interview with the extremely gracious and generous Andre Dubus III. In the meantime, read this book.

My interview with Andre Dubus III is here.
Posted by bibliophiliac at 2:49 PM

You've sold me. Will lokk out for this.

Ooh, sounds good! I love the writing of both father and son, so this is going on my to-read list!

@bermudaonion-it is!
@geosi-Townie is an excellent read!
@Jennifer, you will really love Townie then. If you are familiar with the father's stories, there is a weird overlap between real life events and fiction at times. I'm rereading "The Winter Father" right now in a new light...

Sounds right up my alley. Not sure what a "townie" is thought. Off to Wikipedia I go.

@Ben-in a college town a *townie* is a resident of the town-not affiliated with the college. Usually used disparagingly but probably *townies* embrace it....

This book is not top of my list for my next book-purchasing endeavor! Thank you for a terrific review!

@Amy-Townie is such a good read-hope you will like it...
@BookQuoter-I think you will really like this one...