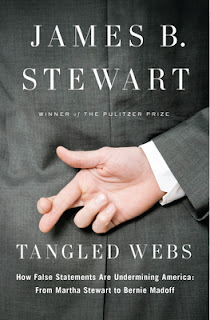 Tangled Webs: How False Statements Are Underminging America: From Martha Stewart to Bernie Madoff
James B. Stewart
Penguin Press, 2011
harcover, $29.95
a copy of this book was provided to me through TLC Book Tours

Tangled Webs is a painstaking examination of the role of perjury in our society. James B. Stewart details four cases that exemplify the corruption of the truth through lies: Martha Stewart who was convicted of perjury in a case involving the sale of stocks; I. "Scooter" Libby in a case involving the leak identifying Valerie Plame as a CIA operative; Barry Bonds, who faced perjury charges for lying about illegal steriod use; and Bernie Madoff, convicted of a Ponzi scheme. In each of these examples, people lied because they thought they could get away with it. James B.Stewart builds an argument that perjury endangers our society, saying "...the truth is the engine of our judicial system. And if you compromise the truth, the whole process is lost." (224)

The subtitle: How False Statements Are Undermining America reveals the seriousness with which Stewart views the act of perjury. Although there is little conclusive data on actual acts of perjury, Stewart posits that instances of perjury are on the increase, and that a cavalier attitude toward lies and perjury is damaging our society.

Whether corruption, hubris, or sociopathy is at the root of perjury, there is no doubt that if perjury is prevalent, any sense of trust in our judicial system must collapse.

Stewart approaches his subject with legalistic scrutiny. Each section is crammed with evidence, interviews, factual evidence, and a complete chronology of the incident. At times all the details become overwhelming; the carefully drawn characters give some relief to the avalanche of fact. Stewart builds his overall case like a prosecutor, and at times this reader began to lose hold of the larger picture, and how the multitude of details fit in. But Stewart is convincing when it counts: through the slow accretion of verifiable details, Stewart shows how lies eat away at the fabric of public confidence. Of the Scooter Libby incident, Stewart writes: "In light of this sorry spectacle, could anyone be blamed for being cynical about the integrity of government officials? The loss in public confidence is incalcuable." (262)

Perhaps the ultimate goal of this book is to stimulate "a capacity for moral outrage" among its readers. In the end Stewart concludes that people like Martha Stewart, Scooter Libby, Barry Bonds, and Bernie Madoff lie because they "thought they could get away with it." Stewart calls on any administration--Republican or Democrat--to"reaffirm the rule of law, the importance of the truth, and embark on a sustained, viable, and public campaign to hold accountable those who commit perjury and false statements." (441)

Tangled Webs takes a serious look at the problem of lying in contemporary society, and perjury in our judicial system. There is no question that Stewart's goal is a worthy one; however, the book's strength is also its weakness. In building his case for the devastating effects of perjury, Stewart creates a dense mass of facts, and at times the reader may lose sight of the larger point being made. The conclusion of the book finally offers the reader an answer to the question "so what?" After building a case that perjury is a serious problem, Stewart shows the reader why it matters.

This book is for those who are savvy about our legal system, philosophically engaged by the moral dimension, and concerned enough to want to know more.

Posted by bibliophiliac at 8:25 PM

This sounds like a good idea for a book that got bogged down in legal babble. It's a shame, because I was interested after reading the title.

This does seem a shame ,sure there is a great tale of modern america in there ,maybe need co writing with a writer to make it less bogged down in legal terms ,all the best stu

I am questioning my own "smartness" for a book such as this... :) Sounds a tad bit like a textbook, but oddly enough, your review has pulled me right in! Does seem a bit stuffed with lots of knowledge hoo-hah and points, but it seems like just the right thing for me to change up my current reading habits!

@Tiny Library-I don't know how a book like this could be convincing without all the details, facts, and evidence. So the book is effective, but not an easy read.
@Stu-my brain couldn't handle this kind of non-fiction writing task--but I'd love to see a novel based on one of the cases!

@Coffee and a Book Chick-I have to admit, I was completely absorbed by this book (and I don't read that much non-fiction). It wasn't difficult, it just required a high level of concentration. Imagine how the juries felt on those perjury trials?

really like the sound of this one. Had not heard of it before.

I'm glad to know that the author answered the "so what?" question in the conclusion - I was hoping you weren't going to say that he left that part out. :)

Thanks for taking the time to read and review this one for the tour.

This sounds like an interesting topic, but I'm a bit turned off by the thought of its density. Too often, I read wonderful subjects turned into a dense litany of facts. The books themselves are not uninteresting, but are also not engaging.